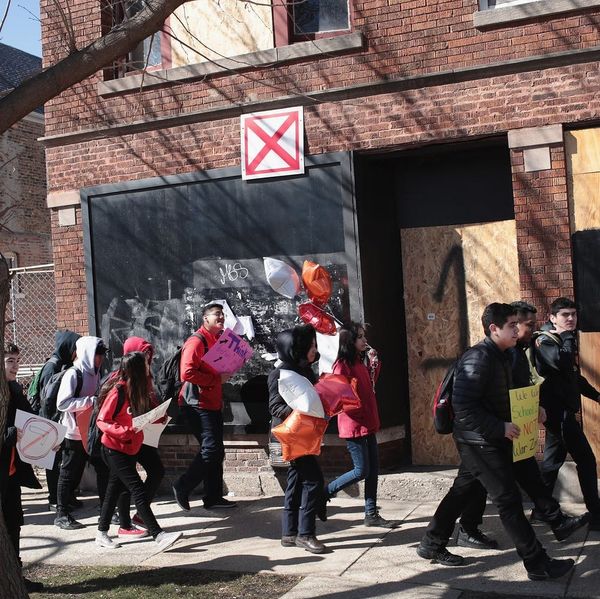 At 10am, students across the country left their classrooms and took to hallways, gymnasiums, streets, and fields in an act of protest and to honor the 17 people who died at the hands of a gunman last month in Parkland, Florida. An organizer of the nationwide initiative told NBC that some 185,000 in 50 states and from about 3,100 schools were expected to participate, and throughout the day, Twitter has been on fire with images and commentary about the event.

Despite much debate about the age-appropriateness of the walkout, students of all ages participated. In Alexandria, Virginia, an elementary school event saw some 65 kids take to the streets holding signs:

Elementary school walkout in Alexandria, Virginia. More than 65 kids, and they are totally silent. Look at those faces. pic.twitter.com/ThyzDtyGo5

At a protest in New York, elementary school-aged kids sang “Put a Little Love in Your Heart”:

These New York City elementary school students sang “Put a Little Love in Your Heart” during their walkout protest today, one month after the school shooting massacre in Parkland, Florida https://t.co/5HNXSSoBAu pic.twitter.com/fgnAfFnYrU

Students at Booker T. Washington High School in Atlanta were threatened with severe punishment if they took part in the walkout, so instead, dozens of students took a knee in the hallway to participate in the moment.

In solidarity with the protesters, the children’s network Nickelodeon went off the air for 17 minutes today.

Meanwhile, the NRA, ever the epitome of tact and sensitivity, tweeted a photo of an AR15 rifle — the weapon of choice for mass shootings — as protests took place across the nation.

In what has to be the cutest interaction of the day, Brooklyn high school and middle school students erupted in cheers of encouragement as a flock of protesting elementary school students passed by:

Lots of amazing #StudentWalkout photos/videos, but this one might be the cutest. Watch the high-school students from the John Jay HS campus raise up a mighty cheer with the elementary-school kids from PS 321 march by. https://t.co/jmnU2URkWw

In Chicago, a student at Kenwood Academy was detained by police. It is still unclear why:

They didn’t quite get to lake shore before a student was arrested https://t.co/dk85GeJbFC

At the NAACP’s head office, workers held a sit-in to honor the protests taking place across the country.

In England, students at the American School in London joined the protest from afar, leaving class and congregating outside the building in central London.

Students at the American School in London walk out in solidarity with students participating in #NationalWalkoutDay to protest gun violence and to honor the 17 victims of the Parkland shooting. #NeverAgain pic.twitter.com/BLo97PXwYw

There were also many parents angered by what they saw as pressure from the administration to participate in a very political act of protest:

My Kid didn't walk out of School today, even though School Administrators were pushing it.

Shame on EVERY Teacher for encouraging this nonsensical BS.

Shame on you for not mentioning the 2+ FBI Warnings

Including, weirdly, Antonio Sabáto Jr., who is apparently running for Congress:

We should not encourage kids to walkout of class. As a parent, I have encouraged my children to stay in class, help others and learn both sides of every issue. @

And in Parkland, Florida, the students of Marjory Stoneman Douglas High School streamed out onto the school’s track field, exactly one month after 17 of their classmates and faculty were killed by a teenager armed with an MR15 rifle.

Parkland student on the nationwide school walkout: “It shows the impact that we’re making and it really shows us that we’re not alone. It gives us a lot of strength.”

At Columbine High School, the walkout lasted for 30 minutes — 17 minutes for the Florida victims, and 13 minutes for the victims gunned down at their own school back in 1999. As the minutes passed, students released a balloon for each of individuals being honored.

Several observers who were attending high school at the time of the Columbine Massacre looked back with regret at their inaction:

I’m the Columbine generation. I can’t help but think what would have happened if we all just walked out then. What if instead of active shooter drills we said ‘no school until gun reform?’ How many lives would have been saved? I’m sorry we didn’t walkout. #walkout

I remember being in high school, watching Columbine live on television. We should have walked out then but we were naive enough to think that event would change everything.
Today's "kids" are already smarter than we ever were and I support every one of them.#NationalWalkoutDay

In light of the 19 years that have passed since that tragic incident, the words carved into the Columbine memorial are particularly poignant:

At the Columbine High School memorial this morning. “It brought the nation to its knees, but now that we’ve gotten back up how have things changed; what have we learned?” pic.twitter.com/94PqoJL4JS

Here’s to hoping that the men and women in power learn something from the incredible power and solidarity displayed this morning by some of the country’s youngest citizens. Today, the future looks hopeful.

Lia Grainger
Lia Grainger is a freelance journalist and reluctant nomad who divides her time between Canada and Spain, weather dependent. She's written for The Atlantic, Reader's Digest, the Toronto Star and other print and online publications, and her work appears in dozens of languages around the world.
Controversy
Current Events
Controversy Teens
More From Current Events