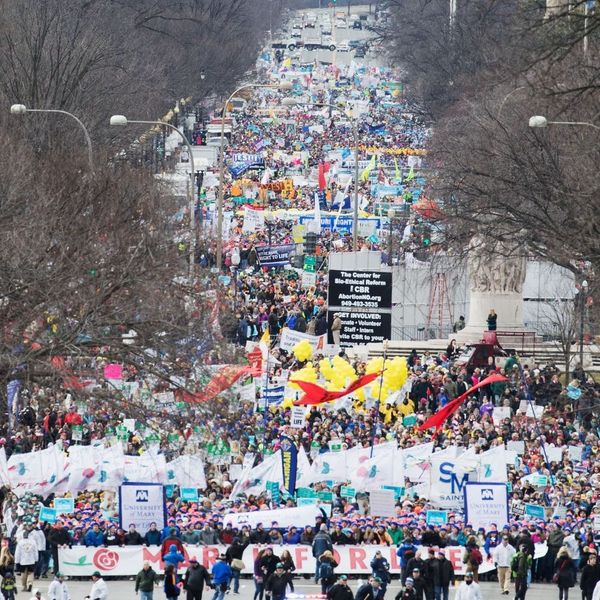 As members of the LGBTQ and scientist community gear up for more marches on Washington in the wake of the history-making Women’s Marches last Saturday, another group with a very different agenda took to the streets for a cause of their own today.

Dubbed the March for Life, the annual event aims to bring pro-life leaders together to “organize, unite and strategize around a common message” and to get that message heard by the government.

President Trump’s administration apparently heard that message loud and clear: In fact, Vice-President Mike Pence (who’s had Planned Parenthood donations made in his name all year) was even on hand to speak, as was President Trump’s key advisor, KellyAnne Conway.

It was my honor to speak at the @March_for_Life today w/ my family & share the commitment of @POTUS to restore culture of life in America. pic.twitter.com/2ucCZBAdHj

As The Washington Post reports, VP Pence told the crowd (whose numbers have yet to be estimated, though reportedly saw as many as 650,000 attendees in 2013), that “This administration will work with the Congress to end tax-payer funding of abortion and abortion providers and will devote those resources to healthcare services for women across America.”

He also went on to say that next week, President Trump would appoint a Supreme Court justice who also upholds those ideals, directly addressing one of four demands made by March President Jeanne Mancini prior to today’s event. Other demands included stopping all federal funding for Planned Parenthood, passing a law that would ban abortion at 20 weeks of pregnancy and making the Hyde Amendment permanent (a move that’s already been made by executive order of President Trump) within the year in order to keep pro-life voters.

With President Trump himself also addressing organizers, Tweeting out his support — a reaction that differed drastically from his reaction to the Women’s Marches — there’s strong reason to believe that he, along with the administration, plans to succumb to each of Jeanne’s aforementioned requirements.

The #MarchForLife is so important. To all of you marching — you have my full support!

2016 stats from the Pew Research Center lists 57 percent of Americans as being of the mindset that abortion should be legal, so it’s a stance that is sure to evoke some MAJOR feelings. VP Pence did ask for the movement to be a peaceful one, however, perhaps following in the lead of the Women’s Marches (which saw zero arrests).

Let this movement be known for love not anger – for compassion not confrontation. #MarchforLife

With women’s rights issues clearly being placed at the forefront of the new administration’s agenda, it’s more important than ever to make your views known: Might we suggest training for office, as these 500 ladies recently did?

How do you feel about the new administration’s reactions to these issues? Share with us @BritandCo.

Nicole Briese
Nicole is the weekend editor for Brit + Co who loves bringing you all the latest buzz. When she's not busy typing away into the wee hours, you can usually find her canoodling with her fur babies, rooting around in a bookstore, or rocking out at a concert of some sort (Guns N' Roses forever!). Check out all her latest musings and past work at nicolebjean.com.
Politics
Politics
Politics Womens Health
More From Politics