Why the 2018 Women’s March Will Likely See Fewer Pussyhats 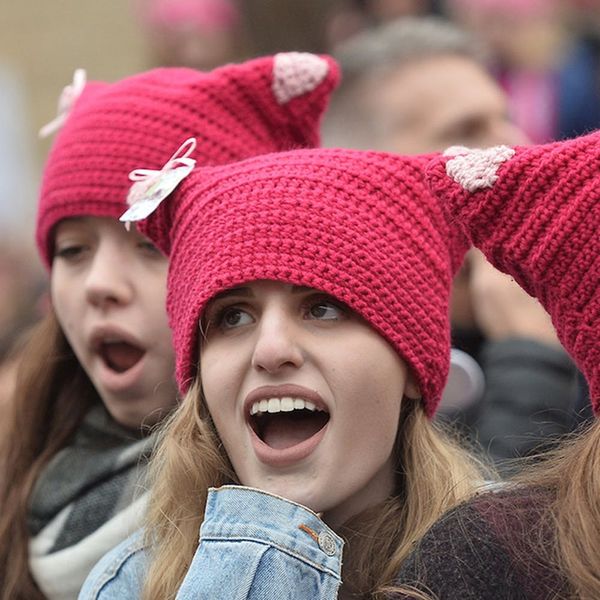 During the 2017 Women’s March, many participants donned a now-iconic piece of headwear: the pussyhat. Participants were encouraged to knit, wear, and share the pink, cat-eared hats, which quickly became the most recognizable accessory of the new women’s movement.

But both at the time and since, many people pointed out that the hat can be read as exclusionary. This year, Women’s March organizers have clearly taken the pussyhat dissent to heart, which is why you likely won’t be seeing as many of the famous at the upcoming 2018 Women’s March.

The hat seemed to be a jab at now-President Trump’s infamous “grab her by the pussy” statement in a leaked Access Hollywood interview. While invoking a woman’s bodily autonomy as a play on words, the hat’s color, as well as its connection to anatomy, have been sparking discussion since last winter.

As the Detroit Free Press points out, the pink color of the hat is most often associated with the anatomy of a white woman, and not a woman of color, which can be alienating to non-white participants in the march. Further, not all women have vaginas either due to medical issues or because they are trans or non-binary.

“It goes against what the idea of what intersectionality is, which is the belief that all identities within womanhood should be welcomed and fought for,” lead Pensacola, FL organizer Haley Morrissette told Moneyish. “It’s being held up as the one symbol that stands for the Women’s March at this point — and because it is hurtful to a lot of people who don’t feel like it’s their symbol, we thought that we needed to address that.”

Phoebe Hopps, the founder and president of the Women’s March Michigan, agrees, telling the Detroit Free Press: “It doesn’t sit well with a group of people that feel that the pink pussyhats are either vulgar or they are upset that they might not include trans women or nonbinary women or maybe women whose (genitals) are not pink.”

Although the hat’s creators chose pink as a color of “femininity,” Krista Suh and Jayna Zweiman clarified their hat’s design on the Pussyhat Project’s website: “We did not choose the color pink as a representation of some people’s anatomy. Anyone who supports women’s rights is welcome to wear a Pussyhat. It does not matter if you have a vulva or what color your vulva may be. If a participant wants to create a Pussyhat that reflects the color of her vulva, we support her choice.”

Will you be ditching your pussyhat for this year’s march? Let us know @BritandCo!

Kat Armstrong
Kat has been a writer, social media maven and mom for longer than she's willing to admit. She's also spent time in front of and behind the camera, interviewing celebs, politicians and acting as a producer for fashion and artistic photography shoots. When she isn't writing for various orgs and publications, she's hanging with her kids, husband and French Bulldog, Peter, in Toronto, Canada.
womens march
Politics
womens march