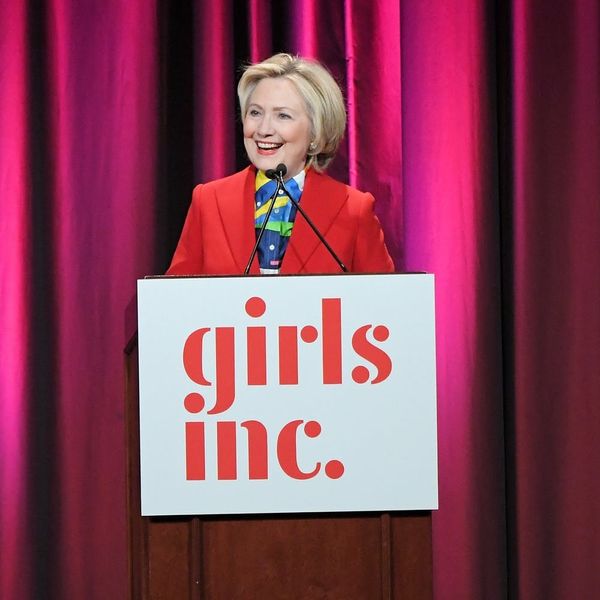 Hillary Clinton’s penchant for pantsuits isn’t just a fashion choice; they often convey a powerful message as well, like when she wore purple for her concession speech to represent the unity of the two parties and when she chose white for Inauguration Day in homage to suffragists. Of course, Clinton showed up at an event on Tuesday in an outfit that spoke volumes.

She wore red to a luncheon in NYC for Girls Inc., a non-profit geared toward educating and supporting girls, to show support for A Day Without a Woman. Under her red blazer, she also sported a blouse that had a very colorful, bold print representing the importance of diversity and inclusivity.

During her speech, she shared a similarly inspiring message for women and girls. “Sometimes the road to progress can feel like it’s two steps forward and one step back, particularly when it comes to advancing the rights and opportunities, and full participation of women and girls,” Clinton said. “But the world is slowly and surely getting to where it needs to be.”

According to the official Women’s March site (who organized the general strike), A Day Without a Woman is a day to “act together for equity, justice and the human rights of women and all gender-oppressed people, through a one-day demonstration of economic solidarity.” Basically, it was a time to show the world what equality really means.

And we’re so glad that Hillz was on board.

Did you do anything yesterday for A Day Without a Woman/International Women’s Day? Tell us @BritandCo!