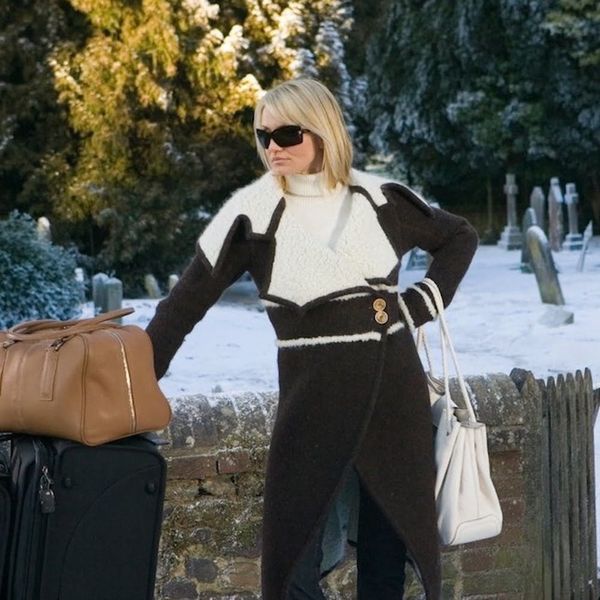 There are few things we like more during the holidays than snuggling up and watching our favorite festive movies. Aside from being comfortingly familiar, these classic flicks just put us in the spirit of the season. What’s more, they give us all the style feels. So if you’re looking to get outfit inspiration for the most wonderful — and celebratory — time of the year, you need only look as far as these legendary holiday heroines. Scroll on for the definitive list of stylish holiday movie leading ladies, in order of most swoon-worthy.

Rosemary Clooney is the epitome of old-school Hollywood glamour in this iconic film. With costumes designed by the legendary Edith Head, Clooney’s turn as Betty includes sparkly opera gloves, statement earrings, and a seriously heart-stopping trumpet gown that has us wishing for a black-tie invite ASAP. It just doesn’t get any better. (Photo via Paramount)

Forget the plethora of questionable plot lines this movie presents — like when does someone like Jude Law actually just show up at your door? Or how did Cameron Diaz pack so many different coats for a trans-Atlantic trip in just a few suitcases? And who leaves their dog behind to be cared for by a total stranger? Regardless, Diaz looks English countryside flawless as Amanda Woods in pretty much every scene, and we are totally here for all of it. Give us all the outerwear. Now. (Photo via Columbia Pictures)

She may have been the object of her husband’s best friend’s affections, but we have a total crush on Keira Knightley’s wardrobe in this instantly iconic movie. As the flawless and adorable Juliet, Knightley is the picture of cozy, early aughts perfection, from her off-the-shoulder sweater down to her low-rise jeans. Somehow, she managed to make 2003 seem chic. Now that’s impressive. (Photo via Universal Studios)

Though this film takes place over several seasons, Judy Garland’s Christmas Eve gown is arguably the real star. As Esther Smith, the daughter of a well-to-do family about to move to New York, she dons a timeless red, puff-sleeve confection that is the stuff holiday dreams are made of — complete with classic white gloves, natch. Oh, and she sings “Have Yourself a Merry Little Christmas.” Pardon us while we swoon. (Photo via MGM)

From her finger waves to her impeccably tailored looks, Donna Reed slays as Mary Hatch in this ultra classic (albeit, somewhat depressing) holiday movie that’s all but synonymous with Christmas. Pearls, lacy collars, full skirts, berets — we want it all. (Photo via RKO Radio Pictures)

Maureen O’Hara as Macy’s special events director, Doris Walker, is a total no-nonsense boss lady, and that applies to her wardrobe as well. Sleek, impeccably crafted suits with classic pearls and pumps make for a truly timeless look that we still want to wear today, 70 years later. (Photo via 20th Century Fox)

Sure, she might be one of the most annoying characters in holiday movie history, but Shelby can dress. Don’t believe us? Just peep her endless supply of festive lingerie, fur-trimmed coats, and, of course, those sky-high stilettos. (Photo via Universal Pictures)

There’s no denying Beverly D’Angelo’s smoke-show status, even as her family is plagued by mishap after mishap. Seriously, how did bumbling Clark land such a babe? She even makes a gold wreath brooch look sexy. And it may have been 1989, but we’re pretty sure her frilly blouse and side-parted waves would still work today. Can you say mom goals? (Photo via Warner Bros.)