Did M.I.A. Just Perform the Most High-Tech Concert Ever? 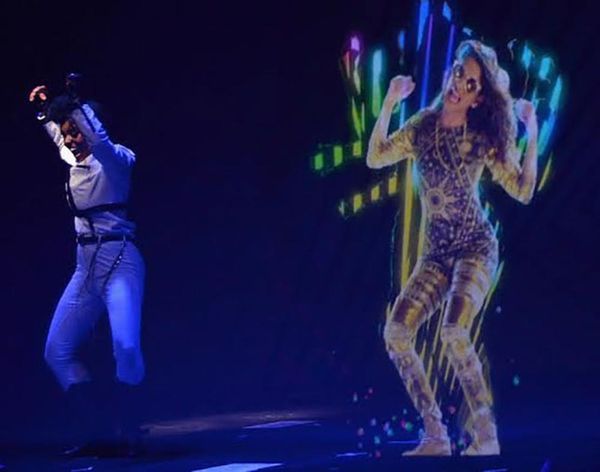 Janelle Monae and M.I.A. just performed the most high-tech concert finale ever. The musicians played live duets together while touring on opposite coasts — Monae in Los Angeles and M.I.A. in New York — sharing their respective stages with hologram images of each other.

Fan video caught the jaw-dropping visuals of Monae’s glittery likeness bustin’ out bouncy rhymes during M.I.A.’s “Bad Girls,” while other footage documents M.I.A. beaming down into technicolor multiples during Monae’s “Q.U.E.E.N.” (appropriate, since the music video is time travel-themed). According to reports, the collab marked the first ever hologram performance to use integrated video mapping, a cutting edge technology that can enhance the already insane 3D projections with animated graphics.

The resulting virtual reality is MUCH flashier than previous hologram-integrated performances, including Tupac’s famous virtual resurrection at Coachella in 2012. But this current stunt is raising just as many eyebrows over how these elaborate projections could forever change the future of live music.

Touring as we know it might become obsolete — why cram the band into a bus when you can just beam down in a different city every night? And with the 20th anniversary of Kurt Cobain’s death upon us, could a digital reunion of the Nirvana frontman with bassist Krist Novoselic and drummer (and all-around good guy) Dave Grohl be in order? We’ll be keeping our eyes out for a holographic appearance at Coachella later this week — perhaps Lou Reed will return for a touching posthumous performance, or Fatboy Slim will beam down a dancing Christopher Walken to the beat of “Weapon of Choice” (um, that would be amazing!). Festival-goers on the ground, get your iPhone cameras ready.

What do you think of holographic performances? Would you pay to see the greats “resurrected” in this fashion? Tell us in the comments below?