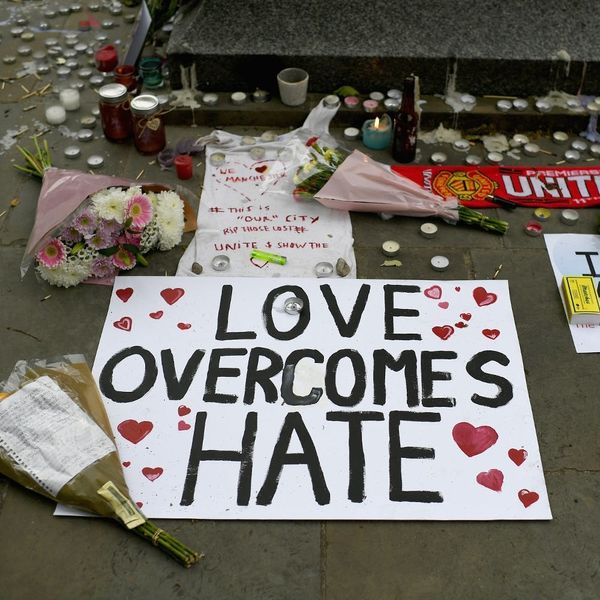 As the world continues to grieve over the terrorist attack in Manchester, stories are emerging that remind us of how tragedy can bring out the best in some people. That includes Ariana Grande’s own mother, who sprung into action to protect a group of her daughter’s fans; Paula Robinson, who led 50 children to safety; and two homeless men, Steve and Chris, whose heroic actions during the attack have touched everyone who’ve heard their stories.

“Just because I’m homeless doesn’t mean I’ve not got a heart, and I’m not human still. I needed to help. I’d like to think someone would come and help me if I needed help. It’s just instinct,” Steve told ITV News. And while that may be true, that doesn’t make his actions any less incredible when you hear the details of how he helped those in need.

“It was children with blood all over them, they were crying and screaming. We were having to pull nails out of their arms and a couple out of a little girl’s face,” he recounted, giving the world a glimpse at the horrifying events that unfolded right before his eyes.

'We had to pull nails out of children's faces': Steve, a homeless man who was sleeping near #Manchester Arena, rushed to help young victims pic.twitter.com/dyxzZpal0Q

Chris was also at the scene (though there’s been some confusion over the two men), with claims that he held a 60-year-old woman in his arms as she died and tried to comfort a little girl who had lost both of her legs.

While both men are surely still in shock over the heartbreaking incident, those who have heard their stories have come together to set up a crowdfunding page (note: It says it’s for Steve, but the comments mention Chris as well). With the hopes of helping both men get back on their feet, 1,645 supporters have currently pledged 91 percent of the £25,000 goal (or around $32,000). A lovely way to show gratitude for the heroic actions of Steve and Chris on that truly tragic night.

Desiree O
Desirée O is a ‘Professional Bohemian’ who loves anything and everything related to the arts, entertainment, and pop culture. She ADORES being a ‘Newsy’ for Brit + Co, covering all of the latest tidbits of awesomeness that you want to read about. When she’s not writing, she’s either making messy art, going on long adventurous walks with her camera, or poking around over at bohemianizm (http://www.bohemianizm.com/). You can find out about Desirée O and her work at http://DesireeO.com/ or follow her on Twitter @DesireeO.
Music
Current Events
Music Politics
More From Current Events