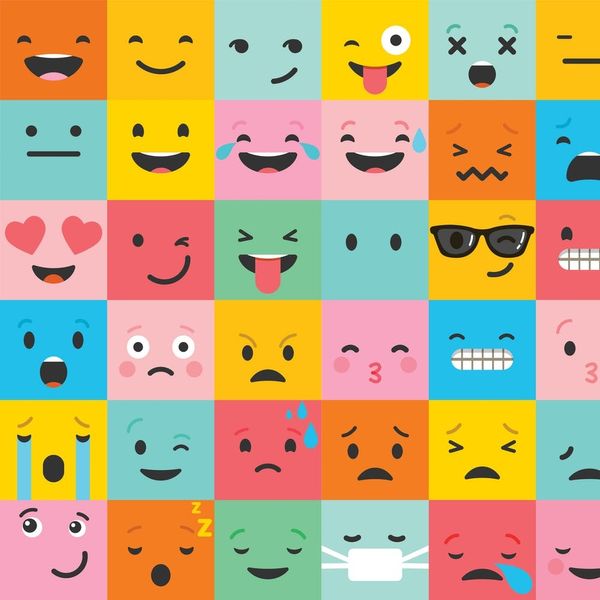 If your text thread with your brother, bae, or male BFF looks a little off balance, you’re not alone. We haven’t seen your phone (we promise), but we have a general idea of how some of these convos look. Your outgoing messages may be peppered with creative uses of a wide range of emoji — the pizza icon to communicate that you just made the best summer flatbread ever, the dancer in the red dress to communicate that your new contour products just have you really feeling yourself today — while his messages to you are perhaps a bit sparser, with only the occasional smiley face or a strategically placed GIF. We’re not into gender stereotyping around here, but we’ve seen enough iMessage screenshots to know that this pattern isn’t just a blind generalization.

Recent data from a May 2017 survey conducted by mobile-GIF sharing platform Tenor shows that 71 percent of Americans use “visual expressions” (emoji, stickers, and GIFs) in text messages. And 59 percent are more comfortable visually expressing emotions than verbalizing them via actual words in a phone conversation. There are also differences in the way that men and women use these extras in their communication. Here are a few stats that demonstrate the gender divide:

It’s not a total case of “men are from Mars, women are from Venus,” though. There are plenty of similarities in the way that the genders communicate via emoji, GIFs, and stickers. The rates at which texters used these cues to lighten the mood and show support, for example, were much closer between males and females in the study. And, generally speaking, there was a consensus among participants that visual expressions help enhance their communication with others; 77 percent believe the people they frequently text or message better understand their thoughts when they use visuals in addition to words, and 69 percent say they feel more connected to their contacts when they do so. It seems like the trend is only going to increase: 62 percent of those aged 18-44 expect to use GIFs even more in the next 12 months.

“The overwhelming shift to visual communication is a direct result of our mobile lifestyles and the increasingly important role of messaging, driven by massive smartphone adoption worldwide,” Tenor’s CEO David McIntosh says in a release. “Ninety percent of GIF searches center on emotion, and [we’re] focused on delivering just the right GIF that expresses it best and defining a new visual language for the mobile age.”

Do you think this study accurately reflects how the men and women in your life use visual expressions differently? Tweet us @BritandCo (emoji and GIFs welcome)!

(Image via Getty, GIFs via Tenor)

Alli Hoff Kosik
Alli Hoff Kosik is a freelance writer who is passionate about reading, running, rainbow sprinkles, her lipstick collection, watching embarrassing reality TV, and drinking pink wine. She lives in Brooklyn with her husband and (in her dreams, at least) three golden retriever puppies. Listen to her talk books on The SSR Podcast.
Adulting
Creativity
Adulting Emoji Gender study
More From Creativity