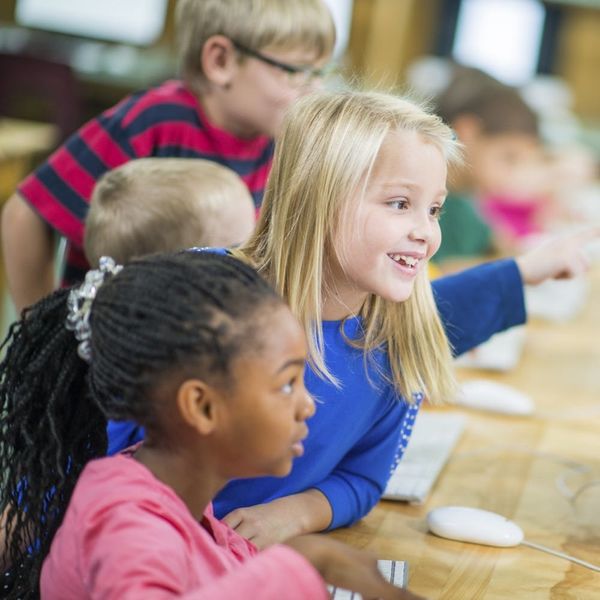 Public education in America has many fundamental inequalities, many of which were highlighted when Betsy DeVos became the US Secretary of Education in February. Without a Net: The Digital Divide In America is a new documentary from Oscar-nominated director Rory Kennedy that looks at one of the major disparities in American schools — internet and technology access — and with it, the importance for the country’s future in closing this digital divide.

The film, narrated by Jamie Foxx, outlines what students need in the classroom in order to prepare them for not only the current world, but for their futures: Individual access to devices such as laptops or tablets, access to WiFi (including at home), and for teachers to have adequate training to properly integrate digital learning into their curriculums.

Kennedy travels to schools both disadvantaged and affluent, speaking with teachers, parents, and, of course, students about their experiences. At one point in the film, we see two Pennsylvania schools that are just five miles apart but couldn’t be more different: In one, there aren’t enough computers to go around. In the other, two young girls build robots, telling the camera they couldn’t imagine their futures without technology.

Kennedy remembers a particularly poignant moment from filming that underlined the severity of the problem. “I remember going home with [Amanda, a sixth grader from a low-income community] one night, and she was using her mom’s cell phone and was writing a paper with her thumbs,” Kennedy tells Brit + Co. “Her thumbs would crack.”

As STEM jobs continue to grow, they’ll also increasingly need more people to fill them. Kennedy cites the looming statistic that, by 2020, 77 percent of jobs will require technology training that isn’t currently being met. Arne Duncan, the former U.S Secretary of Education (and who appears in the film) recently wrote that sub-par digital educations are “leaving our country vulnerable in key areas such as technological innovation, economic development, and cybersecurity. Our inability to resolve the digital skills shortage is bleeding the U.S. economy of approximately $1 trillion annually.”

The US Government has so far had success (and some challenges) with its E-Rate federal funding program to bring adequate connectivity across the country, and Kennedy also points to some of the organizations, like the Gates Foundation, and companies, such as Verizon (who presented the film and is represented in it), that have been working to bring resources to under-funded schools.

“Without a Net has been an imperative tool in our mission to educate people across the country about the digital divide,” Rose Stuckey Kirk, Verizon’s Chief Corporate Social Responsibility Officer tells Brit + Co in an email. “The documentary manifests the inequalities in our education system that have a deep impact on kids in underserved communities. Through Verizon Innovative Learning, we are providing the necessary knowledge and resources to help these kids thrive in a technology-based world with the goal of ultimately eliminating income disparity.”

But Kennedy believes that more people across all sectors need to get engaged and involved to fully address the problem. She suggests watching the film as a start, and points to one community in particular as an example of how, even outside of the system, we can make changes.

“In Coachella Valley, they voted to raise their property taxes to get iPads for the students. This is one of the poorest school districts [in the country],” she says in awe. The district’s Superintendent Darryl Adams also put routers on school buses and parked them in low-income neighborhoods to service the 30 percent of the student body without connectivity at home.

“We can’t really afford the internet,” Sidney Batres, an 11th grader from the Coachella Valley school district says in the film as her and a group of friends stand outside the bus with their iPads in hand. It’s a stark reminder that what many of us take for granted, others need to work hard and sacrifice for, all in the name of their futures.

“When it’s off to college, and after college we’re probably going to go to a job, they’re going to make us use computers, iPads, the newest technology,” she says. “We need to learn how to use these.”

How much do you know about the “digital divide”? Let us know @BritandCo.