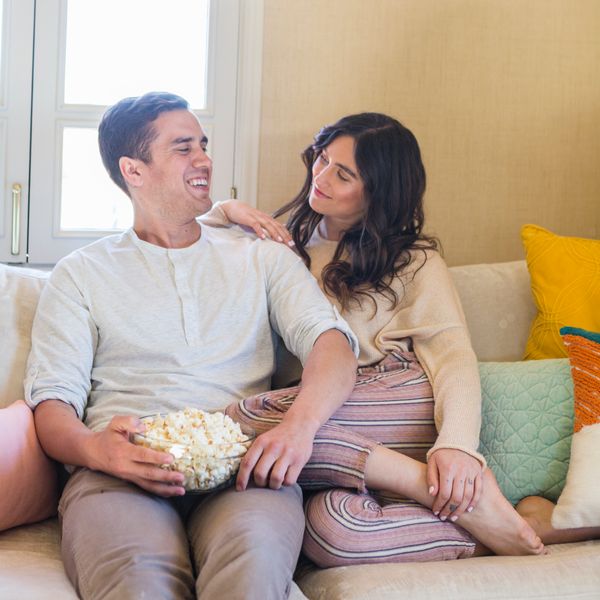 There are plenty of opinions out there about what you should do to ensure a happy, long-lasting relationship. Your mom says that it's all about communication; your best friend swears by keeping things romantic — and don't even get us started on the lessons we all think we can learn from our favorite rom-coms. With so much conflicting advice out there, it's hard to keep track of what we're really supposed to be doing to keep our relationships going strong. Luckily for us, a study spanning four decades weighed in, and the results reinforce what we all want to hear: Successful couples are kind and generous to one another.

According to a recap from The Atlantic of these studies, the fascination with observing married couples began in the 1970s, when social scientists took notice of escalating divorce rates and grew concerned with the way the trend would affect children. In 1986, psychologists John and Julie Gottman set up The Love Lab at University of Washington and invited newlyweds to join them to discuss their relationships.

The Gottmans wanted to do more than have a casual chat with these couples about their recent weddings or their experiences living together. Study participants were hooked up to electrodes for these conversations, during which they were asked questions about their relationship while sitting next to their spouses. Scientists used output from the electrodes to observe blood flow, heart rate and sweat production during the study. Six years later, John and Julie Gottman followed up with the couples to find out if they had broken up or stayed together.

Pairs who had made it to the six-year mark were coded as “masters" by the scientists, while those who'd called it quits or who were chronically unhappy were identified as “disasters." At this six-year check-in, the Gottmans used the data they'd collected with the electrodes to discover that the successful couples had all been calmer during their original interviews than the unhappy couples. The “disaster" participants more often exhibited quick heart rates and active sweat glands. These partners did not have trust and intimacy, and it showed in their physiology.

Even more interesting were the results of another follow-up study organized by the Gottmans in 1990. This time, newlywed participants were invited to a lab set up to look like a bed and breakfast, where the scientists simply observed their behaviors while they acted as they would if they were on vacation. John's goal was to figure out what specific behaviors (outside of biology) could help predict whether a couple was bound to be masterful or disastrous in the long run. Based on the initial experiment and another six-year follow-up, Dr. Gottman determined that the two key traits of successful relationships are kindness and generosity.

This may seem like a no-brainer, but in the context of these experiments and the ongoing studies they inspired, kindness and generosity are about more than just “being nice.” Successful couples in this study were giving of their time and attention, with one partner frequently “turning toward” the other emotionally instead of brushing them off. Newlyweds who were still together six years in were observed meeting their partner’s emotional needs nine out of 10 times, while unsuccessful copies met those needs just three out of 10 times.

In the years since these studies, the Gottmans have found that they can predict the success of any couple with up to 94 percent certainty based on these findings. Do you and your bae want to be part of this success rate? Read on for more specific tips on kindness and generosity based on the Love Lab experiments.

1. Show interest. If your S.O. points something out to you or tries to engage you in a conversation about something they care about, tune in — even if it's not really your thing. This is an example of “turning toward" an attempt at connection.

2. Having a bad day is not an excuse to disengage. The true test of your kindness and generosity comes when you're not feeling at the top of your game. "If your partner expresses a need and you are tired, stressed or distracted, then the generous spirit comes in when a partner makes a bid [for your attention] and you still turn toward your partner," Julie Gottman said.

3. Fight kindly. Master couples do argue, but they know how to express their anger constructively. Instead of making accusations in the heat of the moment, explain why you are hurt and upset.

4. Trust your S.O.'s intentions. If your partner says they are doing something to make you happy, believe them. Don't overanalyze or try to sleuth out ulterior motives. Generosity is all about being giving with your love and appreciation.

5. Share joy genuinely. Instead of waiting for a challenging time to prove you can be supportive, learn to be a cheerleader for your significant other in happy seasons, as well. When bae comes to you with good news, put down your phone and be part of their joy without any distractions.

How are you kind and generous in your relationship? Tweet us @BritandCo!

This post has been updated from a previous article published in May 2016.

From Your Site Articles
Alli Hoff Kosik
Alli Hoff Kosik is a freelance writer who is passionate about reading, running, rainbow sprinkles, her lipstick collection, watching embarrassing reality TV, and drinking pink wine. She lives in Brooklyn with her husband and (in her dreams, at least) three golden retriever puppies. Listen to her talk books on The SSR Podcast.
Relationship Advice
Lifestyle
Relationship Advice
More From Lifestyle