How to Deal With Criticism in a Relationship 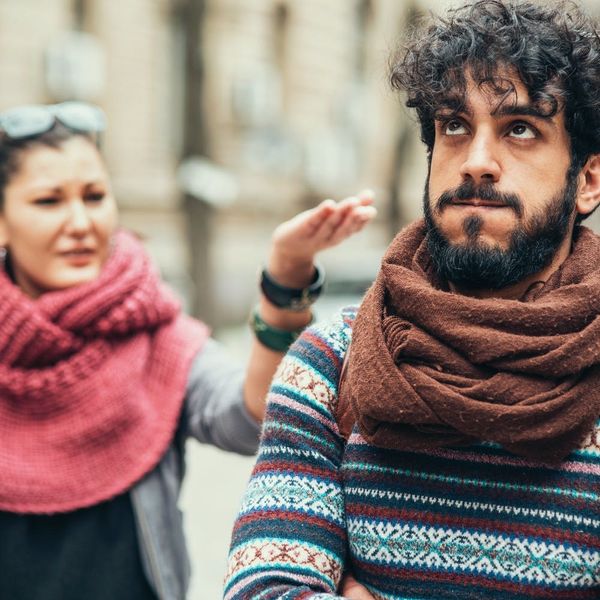 Criticism has been called “the kiss of death” in relationships. While there are a lot of things that can put your romance on the rocks, like defensiveness or over-the-top family drama, experts agree that super judgmental — or just plain mean — comments are definitely one of the worst offenses. Why? The short answer is simple: Criticism makes people feel bad. Any time you’re making your partner upset or they’re doing the reverse to you, it’s definitely not a good thing. We chatted with three relationship experts to find out how to deal with criticism — whether you’re on the giving or receiving end.

Why Criticism Is So Bad FOR YOUR RELATIONSHIPS

Criticism is so damaging to relationships because “it’s hard to maintain positive, loving feelings if you feel like you’re constantly under attack by your partner,” says Anita Chlipala, licensed marriage and family therapist and author of First Comes Us: The Busy Couple’s Guide to Lasting Love ($18). “You may feel like you can’t do anything right or that you can’t ever please your S.O.,” she explains. Some people may start to wonder if their partner even likes them anymore if they’re getting criticized all the time, which is definitely NOT ideal for your individual self-worth or your love life. Chlipala also points out that it’s really difficult to be vulnerable and share your feelings with someone — a must in any communicative relationship — if you’re worried about being criticized or devalued.

Of course, it’s not expected that you think everything your S.O. does is perfect! Lindsay O’Shea, a relationship therapist, notes, “There will always be things about your partner that you’re not the biggest fan of, but when it becomes an attack on their character, it can signify a deeper issue in the relationship.” If the things that are being criticized are specific actions, that’s more of a complaint, but if character traits are being discussed, that’s full-on criticism and a warning sign that there may be other things wrong in the relationship. “Starting a statement with ‘you always’ or ‘you never’ is a sure sign of criticism in relationships,” explains O’Shea. “Harsh communication styles may be correlated with stored-up grievances and attempts to suppress negative emotions,” she notes. These negative emotions can build up over time and cause larger problems down the road.

How to Bring It Up If You’re Being Criticized

It’s not always easy to bring up the fact that you’re not okay with being criticized on the reg, but it’s absolutely necessary, says Erika Boissiere, licensed marriage and family therapist and founder of The Relationship Institute of San Francisco. She suggests that if you’re on the receiving end of harsh remarks or receive a direct complaint from your partner with no request (AKA solution) attached to it, you can have a productive convo with your S.O. by doing these five things.

1. Listen and ask more questions. Usually, critical comments from a partner are bottled-up resentments. As tough as it may be, you should at least try to learn more about what they said, and try to understand if there’s anything deeper driving their not-so-positive remarks.

2. Understand their reasoning. Then, say to them, “This sounds important to you. Can you tell me why? I want to better understand.” By digging into the reasoning behind their criticism or complaint, you may gain more motivation to change the behavior or at least understand where they’re coming from.

3. Don’t get defensive. Once the criticizer (ahem, your S.O.) begins to explain their side of things, try your absolute hardest to not get defensive, says Boissiere. If you do, it could lead to a fight or, even worse, shut the convo down and potentially cause more resentment.

4. Problem solve. Do your best to help your partner turn their criticism into a request. For example, discuss switching things up from, “You’re so lazy sometimes!” to “Next time I’m doing the dishes, could you help me out please?” to help them turn critiques on your character into a path toward a stronger relationship.

5. Be accountable. Make sure you can be accountable for anything you agree to do. Don’t make a promise about what you’ll do to fix the behavior that’s bothering them if it’s something you can’t do, don’t want to do or believe you shouldn’t have to do.

If a hurtful remark is more of a one-off situation, O’Shea recommends using your discretion about whether to bring it up. “It’s important to practice emotional intelligence rather than react to every miscommunication in a relationship,” she explains. Instead of reacting the first time your partner says something critical, “Pay attention to patterns of communication and disconnection in your relationship.” It may not be a problem, or issues may run deeper than those negative asides from your partner.

Ways to Check Yourself IF YOU’RE DOING THE CRITICIZING

If you think you might be criticizing your S.O. or they’ve told you that you are, you can totally turn things around. “One way is to check your ‘shoulds,'” says Chlipala. “Whenever you think, ‘they should’ve done…’ it’s an opportunity to learn more about your partner.” The bottom line is, no person, no matter how amazing they are, is going to do things the exact same way you would or exactly as you’d want them to all of the time. “A ‘should’ statement conveys that your S.O. is doing things the wrong way when really it’s just a different way,” she adds. Though it might take practice to notice your thought process and to challenge it, it’s totally worth it.

Chlipala also says that if you find yourself saying negative things to your boo, “practice focusing on your partner’s behavior instead of their personality.” You can also practice rephrasing complaints you have into requests, so that they’re actionable, rather than just observations about what they’re doing wrong.

When to Give Up

Sometimes, so much resentment and negative feelings build up that it seems like the only way to stop the cycle is to end the relationship. “Only you know if your relationship is worth giving up or salvaging,” says Boissiere. But if you’re feeling miserable all the time, that’s a pretty good sign that it may be time to end it. She notes that couples who decide to call it quits after dealing with criticism issues usually have a myriad of problems going on, but that criticism is almost always the main culprit. “After all, no one likes to feel attacked, like they’re never enough or that their partner is unhappy with them,” she says.

Have you ever dealt with criticism in a relationship? How did you nip it in the bud? Give us your tips @BritandCo!

From Your Site Articles
Julia Malacoff
Julia is a writer, editor and proud life-long vegetarian based in Brooklyn, NY. An avid traveler, meditation enthusiast and exercise junkie, she stays active in every new locale she visits.
Dating
Relationships
Dating Relationship Advice
More From Relationships