I Tried Eating a Futuristic Meal Replacement for a Week, and Here’s What Happened 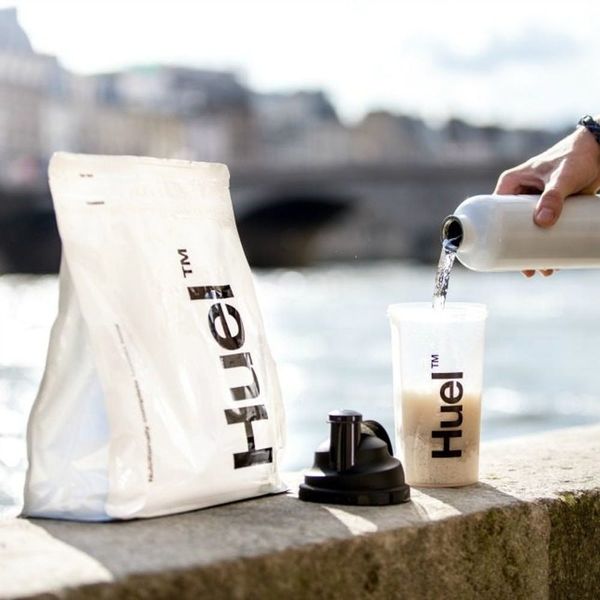 I’m always looking for new ways to eat healthy meals when I’m pressed for time (which is basically always), so when I saw an advertisement on Instagram for UK-based Huel, a futuristic vegan meal replacement powder you use to make shakes, I decided to try it for a week to keep my unhealthy takeout and delivery habit in check. Usually when I’m super busy I try jazzing up one of the frozen veggie burgers I perpetually have in the back of the freezer, or whipping up a golden smoothie I can drink on-the-go. But sadly sometimes even that seems like too much work, and lately I’ve found myself relying far too much on my local pizza, Thai, and falafel joints when I need to eat but don’t have time to cook.

I also never seem to find the time to eat breakfast, meaning I have a mid-morning crash. Then I’m overly hungry at lunch, which results in me making unwise decisions about what I should eat, and often leads to a mid-afternoon carb crash that totally disrupts my productivity for the day. So I thought that Huel could help me get out of this cycle. A lot of people in the tech industry swear by meal replacement Soylent, but Huel sounded less terrifying (I just can’t get the sci-fi thriller Soylent Green out of my head), and the ingredient list seemed like it would probably taste better.

Huel is made from oats, pea protein, flaxseed, brown rice protein, MCTs from coconut, sunflower lecithin, a vitamin and mineral blend, and vanilla flavor, and is sweetened with Stevia and sucralose. There’s also an unflavored, unsweetened version, but I went for the vanilla option thinking it would probably taste better. Huel contains vitamin D and B12, two vitamins that are hard to get just from food when you’re eating a plant-based diet, which was a plus for me. If you use the full three scoops that are recommended when using Huel as a meal replacement, each shake has 500 calories, 37 grams of protein, and just one gram of sugar. I ordered Huel online, and for roughly $54, the order came with two large white bags of powder along with a shaker bottle (plus a tee shirt!). The time had finally come to try it out.

That feeling when your Huel arrives at your doorstep.⠀ ⠀ @martinessemann has gone for a Vanilla and Unflavoured split, plus a pack of 9 Flavour Boost sample sachets. What did you order? ⠀ ⠀ Hit the link in our bio to #gethuel⠀

I was initially kind of scared to taste Huel. Memories of chocolate SlimFast hastily chugged in the mornings before high school swirled in my mind, and I feared that Huel would be similarly joyless. The recommended recipe is one part Huel to five parts water. I added three scoops of Huel to my bottle, along with some ice cubes and water, and shook like crazy until it was blended. The blender bottle that came with the powder works like a charm — honestly, I’m kind of obsessed with it now. (Is it bad that I can’t stop thinking about what a convenient cocktail shaker it would make? Yeah, I’m pretty good at healthy living.)

I took my first sip and was pleasantly surprised by its mild but natural-tasting flavor. The only thing I found off-putting was a slight graininess, and the artificial sweetener gave it a bit of an aftertaste. In the recipe booklet that came with the powder it recommends adding a teaspoon of instant coffee granules to your shaker, and I found that doing so made the weird aftertaste totally undetectable. Win!

Huel as a Meal Replacement

The package recommends that you eat Huel for breakfast and lunch, then have a sensible meal for dinner. Since I almost never eat breakfast, I really loved having Huel in the morning. I definitely felt more energized, and was less ravenous when it was time for lunch. However, I didn’t think that it was very filling. You can blend Huel with frozen fruit or dairy-free milk to make it a little heartier, but since the whole point for me was to fuel my body with something healthy while making hardly any effort, I didn’t try this.

The first two days, I was really hungry after having my lunchtime Huel. I ended up having a snack both of those days, but inspired by the nutritional content of my earlier meals, I decided to try to keep things healthy, relying on some big Medjool dates and a handful of wasabi-soy almonds to quell my hunger until dinnertime. After the first two days, though, I started to find it really satisfying. The creamy, oaty flavor is really cozy, and the texture is thick enough to sate your hunger, but not so thick that you feel like you have to choke it down. I liked to shake mine with extra ice so it was super cold and refreshing.

Eating a futuristic vegan meal replacement for a week did change the way I ate. I made extra effort in the evenings to cook something healthy for dinner, I snacked a lot less throughout the day, and I didn’t order delivery once. And Huel is genuinely very simple to make — I was so thrilled that I didn’t have to lug my blender out of hiding and deal with cleaning it, thanks to the shaker bottle that came with the powder.

That being said, I don’t think I’ll continue to have Huel for two meals a day. I’ll definitely stick with it for breakfast, because it really did make a marked change in how energized I felt, but I think I’ll only have it for lunch on days when I’m really pressed for time. I just like eating a variety of foods and flavors too much to have the same thing for two of my three meals a day.

Some people may be able to stick to an all-Huel diet, but for a foodie, that’s a little extreme. But if you’re looking for a quick and easy meal replacement that you can effortlessly make and consume when you truly don’t have time for anything else, then Huel might be just the thing.

Justina Huddleston
Justina Huddleston is a food writer living in Los Angeles. When she's not busy writing, she spends her time in the kitchen creating both virtuous and decidedly junky vegan food. Buffalo chickpea pizza, anyone? She's also been known to eat a plain block of tofu or beans straight out of the can for lunch, but somehow those culinary adventures don't make it to her Instagram. You can follow Justina on Twitter or see what's cooking in her kitchen on her blog, A Life of Little Pleasures.
Healthy Essentials
Food News
Healthy Essentials Healthy Living Hit Refresh
The Conversation