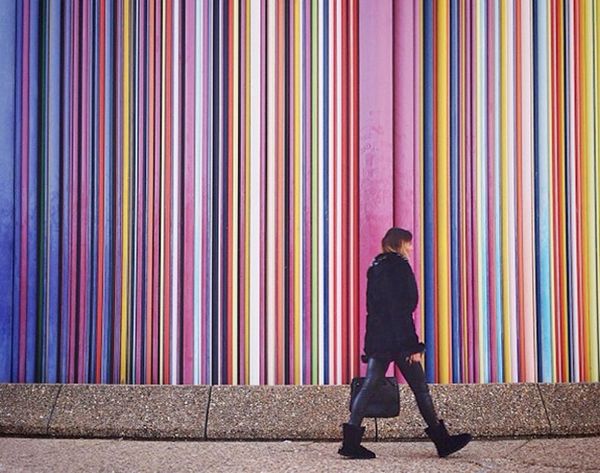 Street photography has been around long before the days of Instagram feeds, but now it’s more accessible than ever. From the fashionable streets of Paris to the inspiring architecture of Barcelona, you can satisfy your love for big city life from wherever you are through your phone. Here are 15 of our favorite photographers who are taking their skills (and us!) to the streets.

1. @nicanorgarcia: It’s time to venture to the colorful world of Barcelona. Nicanor García seems to snap every stoop and sculpture in the city with equal precision and grace. Looking at his feed, it seems like the whole city is painted in shades of pink and blue, but we’re not complaining.

2. @humansofny: Humans of New York has reached far beyond its namesake city and has gained fans from all around the world. Photographer Brandon Stanton’s photos are stunning, but that’s only half of it. In addition to taking pictures, Stanton asks people questions about their lives that reveal the most personal, truthful answers. You’ll definitely want to read the captions on these.

3. @thesartorialist: Scott Schuman is basically the god of street fashion. The characters he captures on the street are fashionable in the most extravagant (and, in this case, simple) ways. You’re going to want to follow The Sartorialist for style inspiration to up your street style game stat.

4. @garethphon: Taking photos around Johannesburg, South Africa, Gareth Phon captures beautiful glimpses into the architecture and people of his home town. We love how he goes from urban to rural landscapes and finds the most interesting compositions in both worlds.

5. @wheninparis: The name almost says it all. Paris is a city of forward fashion and ancient architecture, and photographer Shannon Ferguson captures it all. We really don’t think we could ever tire of seeing pics of Paris.

6. @mumbaipaused: Photographer Slogan Murugan describes his blog as “photographs and stories from the city that’s always on the move.” He has an eye for bringing new life to old street art, discarded litter and the lively people of Mumbai.

7. @leoleoparis: We didn’t think one Parisian photographer was enough, so here’s another. This guy most often displays his work in black and white, cloaking the City of Romance in an extra layer of mystery. He has a knack for getting candid shots of people in interesting positions.

8. @jonkiii: Jonne Kingma is a Netherlands-based professional photographer. Most of his work stars models in places around the city, and it seems he has a particular interest in trains.

9. @eddga: Eduardo Gómez is one photographer who loves color. He really embraces the vibrant hues all over Mexico City and snaps a new color up everywhere he goes.

10. @hvenegaard: Anders Hvenegaard‘s travels take him to the most interesting places. His feed features architecture and people from all of his adventures, like this one that was taken in Cuba.

11. @visualmemories_: Scrolling through this feed, one might assume that New York City is in a perpetual state of Golden Hour. Follow if you love pics of the Big Apple through chain link fences, silhouetted skylines and shots from the sidewalks of Brooklyn.

13. @star.rush: Star Rush proves that the streets are filled with still life scenes and portraits just waiting to be shot. She’s a Seattle-dwelling documentary photographer who’s sharing her gallery of rare moments via the good old ‘gram.

14. @mishobaranovic: In the world of mobile photographers, Misho Baranovic is kind of a big deal. He’s based in Australia, but his work has been shown off-screen, on walls and in magazines all over the world.

15. @oggsie: Olly Lang’s photography is raw and unfiltered. He’s based in London and often photographs the seemingly mundane yet curious moments that would otherwise go unnoticed. Above: not such a mundane moment ;)

Who do you follow for a glimpse of the city? Let us know in the comments!

Katelan Cunningham
Katelan is a tech junkie obsessing over all things startup and design. She has entirely way too many apps on her phone and is no stranger to binge-watching. She accidentally fell in love in Los Angeles and that’s where she currently lives, writes, tweets and grams.
Instagram Roundup
Fashion
Instagram Roundup Photography