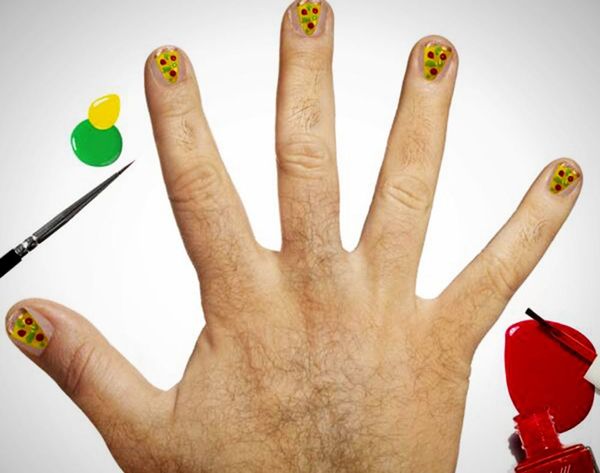 April Fool’s Day can be tricky. Three of your friends already texted to tell you they’re pregnant (they’re not), there was a whoopee cushion on your seat at work (yes, they still make those) and your old friend the Internet is bombarding you with lies— lies! Fake releases, bogus announcements and click bait that you can’t believe you fell for. Again.

Invisible Tattly: Our favorite designy temp tattoo makers made us giggle with their April Fools’ Day special edition tat made with a safe, non-toxic ink from a rare squid found in Brooklyn’s Gowanus Canal. We knew this was a prank because any ink made from a Gowanus squid would definitely turn your skin fluorescent green.

Our ‘90s Takeover: The glittery site redesign and the love for Lisa Frank may have been a winky face in the spirit of the holiday, but we’re serious about our ‘90s love all year round. Plus, it gave us an excuse to wear our favorite outfits of the decade to the office.

The Honda Handmade Series: We love the mock maker spirit in Honda’s faux-mercial for their new DIY car, but even we don’t know if we want to share the road with homemade creations. PS, can someone get this couple a spinoff? They could give Portlandia’s Fred and Carrie a run for their fair trade money.

Au Jus Cleanse: Fiiiinally — a juice cleanse for meat lovers, right, guys?? Our SF-based buds, The Bold Italic posted this and made us laugh so hard we puked. Or maybe that was the thought of sipping on bottled beef blood all day…

Airbrb: Cash in every time you leave your desk with the new space-sharing app from Airbnb. The cleaning fees must be cheap, maybe like, an extra $0.50 for a Clorox wipe per use?

The Edibox: An Edible Domino’s pizza box? Well… we wouldn’t not eat it…

Dolphin Rainbow Lasers: Step aside, cats, there are other animals on the Internet. NOVA gets all adorable with an April Fool’s post on how scientists accidentally created rainbow lasers after beaming light in front of dolphins. Is it too late to join forces with them on our Lisa Frank roundup?

Nokia 3310: Huh, somehow we missed the news of Nokia’s throwback update for their latest phone… If you want to play Snake again THAT badly, there is an app for that.

Oranges vs. Apples: Here’s a look at what a more serious publication like The Economist does on April Fool’s Day: Make an intricate little charticle about the top thing that “rankles data mavens”… apples and oranges. You can almost hear their smartypants staff snickering at the subhead, “A fruity look at unrelated variables.” (To be fair, we did too.)

: Toms + Uber is a collaboration we would definitely be down with. Though Ubering up a ride via foot + cardboard car, is not exactly what we had in mind (

on the map though is everythinnnnggg).

HTC Gluuv: We’re always on the lookout for new wearables that work seamlessly with the other gadgets in our lives — like our boomboxes!

Virgin America + Nest: Oo, another collabo between companies we love. Smart home meets smart plane with a personalised Nest-controlled climate option in every seat on Virgin America flights. Hmm. Actually, can this one be real?! Please!

Hall & Oatesmeal: Here is an example of April Fool’s Day online trickery at its finest. Thrillist posted about Daryl and John’s plans to release the “only Hall & Oates-endorsed oatmeal” featuring flavors like Maneater, Rich Swirl and You Make My (Peaches &) Creams Come True. USDA Organic too!

Foot Bras: Warning: This prank might make you a tad queasy. THE BEFORE AND AFTER PIX, I MEAN…

Netflix: Sizzling Bacon: Netflix Is the New Breakfast Meat with a 20 minute movie that documents the thrilling creation of crispy, greasy post-pig product. Maybe the funniest part of this trick is that when you’re done with the mockumentary, Netflix suggests you watch Kevin Bacon movies next. Seriously.

Clearly Rotisserie Chicken should be next on your queue…

*NSYNC Reunion Tour: Joining us in ‘90s-themed pranks today are the boys of “Bye Bye Bye.” Lance got a little cray with his Twitter privileges and Tweeted that the fellas would be reuniting for a reunion tour next year. Some how we also think the line in their Twitter bio about the account being run by @jtimberlake is also an April Fool’s Day joke :’(

The Twitter Helmet: So weird, a giant social network “pre-announces” a wacky new product on April 1. Wild. Twitter blogged about a new helmet that allows users to send out 140 character updates via a “pecking” head motion. Blue Bird, you can do better than this.

Bro Nail Art: Sephora nailed it on Twitter with a pic of fingerpaint meant for bros to express their inner selves through a new beauty routine. Dudes, you’re used to having pizza on your nails, let’s just make it art.

BMW ZZZ Series: The ultimate driving machine made the ultimate sleeping machine, a souped up, lay down crib for little ones.

The Backwards Marathon: Running company JackRabbit got NYC runners good this AM, announcing a whole 26.2 mile race for “rennurs” aka those who love running backwards. Hey, that would take some serious thigh strength — we’re in!

Cats You May Know: Cats, the Internet loves you on this day and all days. LinkedIn launched a new feature to connect you with the felines you might know (Prissy Sissy, Pooptart, Furrgus to name a few) professionally and personally (Paws-onally? Nah.). Let’s hope that whole “your real email address shows up on your profile” is an AFD stunt too…

We’ll be updating our guide all day so stick with us for warnings and some things we thought were actually pretty clever. Share your favorite (and least favorite) stunts you find with us below!