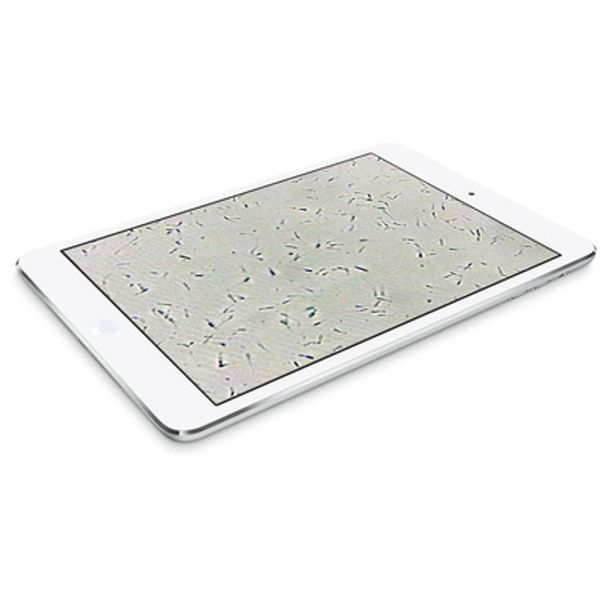 According to the CDC, about 11 percent of couples looking to conceive will have difficulty doing so. Infertility can be both a tough and extremely painful reality for some, and many have turned to technology for help. Even Kim Kardashian openly documented undergoing IVF and seeing multiple doctors on the last season of KUWTK. For others, smartphone apps have been the answer. Recently, there’s been an uptick in mobile health app usage, with fertility apps ranking as the second most popular downloads next to fitness apps. While infertility is incorrectly still considered a predominantly female-related issue, in a third of these cases, men are actually the sole or contributing cause.

iSperm uses an iPad app and an optical lens attachment to evaluate the concentration and motility of sperm within a sample. According to their site, you can receive an analysis in 17 seconds — that’s seven seconds of video recording and 10 seconds of analysis. iSperm uses an image processing algorithm to evaluate the competence of the sperm. Currently, iSperm is estimated to be used by over 200 farms around the world. In the article by the Sydney Morning Herald, a livestock farm manager in central Taiwan gauged a 20 percent increased pregnancy success rate since the farm began utilizing the app.

For the couple who hopes to conceive, an app could someday be part of the answer.

Would you and your partner be interested in trying out this kind of at-home fertility app? Tell us in the comments below!

Kimberly Wang
Kimberly Wang writes about all things pop culture, tech, style, and beauty. She's a Bay Area transplant and has an MFA in Creative Writing from Columbia University. On a sunny New York day, you can find her hanging out with her mini schnauzer Isabelle Jellybean on a blanket in Central Park.
Kardashians
Health
Kardashians
More From Health