It’s a New Year, So I Took a Fitness Class for Models 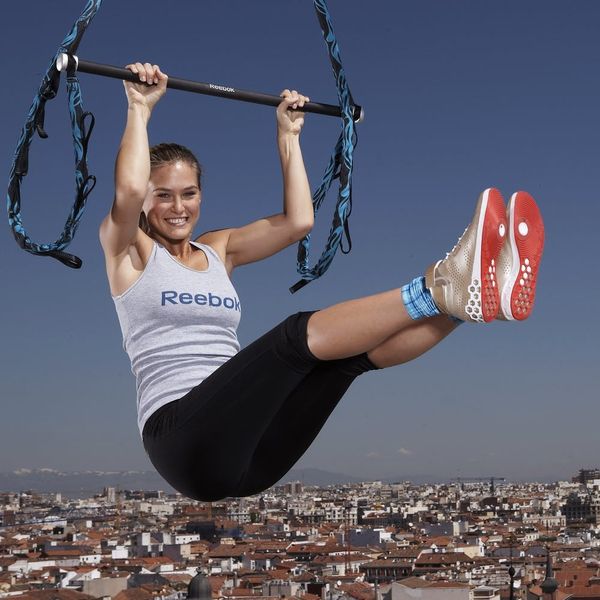 “What’s the worst that could happen?” I asked myself as I hustled the 20-minute walk from Brit + Co‘s Tribeca office to the Bowery in lower Manhattan, where I was embarking on my first class at a boutique fitness studio called ModelFit. The name basically says all you need to know about the brand: it’s fitness for people who want to look more like models. I hated it already.

Not to imply that I wouldn’t love to look like a model, but I’ve had nearly 32 years to accept what nature gave me instead. At this point, the only way I could realistically pass for model material would be if someone cast me as a teenage boy in a back-to-school ad to be displayed exclusively in dimly-lit rooms. But, as I entered the studio in my men’s Vans and baggy jeans held up by a discolored suede belt I’d had since high school, I realized branding isn’t everything.

The studio looked like any of the many barre fitness studios I’d visited through my ClassPass membership: hardwood floor, mirror and ballet barre, a wall of mats and baskets of resistance bands. It was just the messaging that felt unfamiliar — or maybe, more accurately, out of date.

Ready to bring in the New Year 🥂

In 2018, the body positive movement has shaped the way we talk about fitness for what I believe is the better. Though the diet industry was worth an estimated $66 billion US dollars in 2017, we’re beginning to make strides toward changing the way we talk about health and exercise in relation to our bodies’ shape and size. The teens of today seem quicker to call out fatphobia and body shaming than my fellow millennials once did, and more and more brands and health studios are following the younger generation’s lead by promoting “strong” instead of “skinny” as a lifestyle goal.

I came of age in the late ’90s and early 2000s, an era when the standard fly on your hiphugger jeans might be two inches long (rather, two inches short) for the purpose of showing off the jut of your hipbones (with the accidental bonus of buttcrack anytime you sat down). Basically, everything I wore between the ages of 13 and 20 seemed expressly designed to warp a developing self-image, and the way we talked about our bodies and exercise habits reflected the toxic, pre-Instagram messaging of a media industry most of us didn’t have a voice in.

The name “ModelFit” felt to me like a relic of those days, the days before young women of all shapes, sizes, abilities, and shades had the option of sharing selfies on social media to proclaim, “Hey, my body is beautiful,” and the fashion world took note. While I’ve certainly been to fitness classes that touted tricep workouts as a benefit to “tank-top arms,” it did feel odd to be at a studio with both the word “model” in its name and an instructor cheerfully talking us through a shoulder exercise that, she promised, would target “that bra bulge WE DO NOT LIKE.”

While I never got over my hangups, the class itself was fun. It was basically like an old-school aerobics class (picture Jane Fonda in a leotard with legwarmers and tights) combined with resistance band toning exercises, plus the occasional barre class calf flex and plié. The instructor was positive and encouraging, and the class size was small enough to allow for personal attention. I worked up a sweat, and the next day I felt the requisite soreness of a class well done.

All in all, I liked it. But I’m having a hard time getting over the idea of marketing a “model fit” workout. While the modeling industry may be expanding toward inclusivity, when I think “model” I don’t necessarily think “fit.” I grew up with a modeling aesthetic that people literally called “heroin chic,” whose queen Kate Moss would famously declare that “nothing tastes as good as skinny feels.” Given those circumstances, I’d be more likely to free-associate the word “model” with “deprived,” calling to mind the horror stories of now-curvier models like KhrystyAna who once starved and suffered in order to fit the mainstream modeling industry’s rail thin mold. To me, it’s not a positive association.

That said, I left the class feeling great. I’d worked muscles I hadn’t touched in months, and it was the most cardio I’d done in ages. I would even do it again, in which case, I’d do one thing differently. I’d try to think of “model” more literally: as in, working toward a healthier model of the body I already have.

Would you try a workout with model branding? Tell us @britandco.