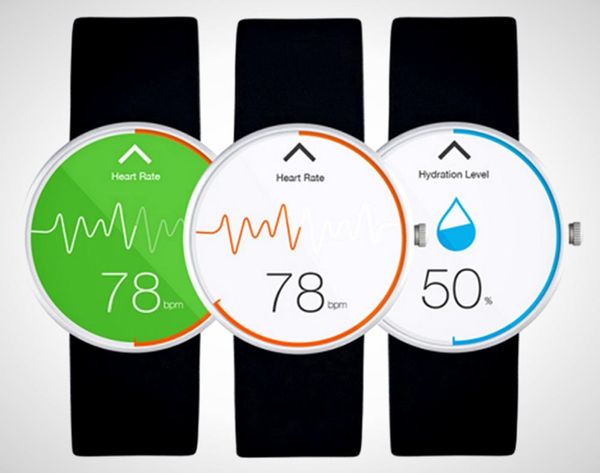 Monday’s long-awaited WWDC chat touched on a lot of things that will one day work with the things we thought they were going to talk about. We got to know all about iOS 8, but no peek at the iPhone 6. We got to hear about the new Health app and the developers’ HealthKit, but still no mention of Apple-branded wearables. We were starting to get impatient… until today.

If their laps finished, soccer balls kicked, golf swing analyzed energizer gym bunny commercial above didn’t reaffirm your belief in Apple’s Health goals, this news will: Nikkei, a business publication that covers Asia, is reporting that Apple’s iWatch will debut in October after September’s iPhone 6 launch.

We know that the watch will collect health and activity data and sync with iOS 8’s Health app, as well as serve as a notification center for smartphone messages and alerts. When it comes to physical features, Nikkei also reports that it will have a curved OLED touchscreen.

Whether or not you’re jumping for joy (and excited to eventually be able to count your calories as you do so) over this news, Apple is pretty confident you or someone you know is pre-ordering the device in your mind right now. According to a parts manufacturer who spoke with Nikkei, Apple plans on selling 3-5 million units. Per month. That’s more than the number of watch-like wearables sold in the WORLD last year. That’s a lot of smart gadgets under the Xmas tree and even more people wearing them in 2015 vs. 2014.

We’ll stay tuned for more Apple scoop (you know we’re good like that ;) as fall creeps closer. Are you more excited to upgrade your iPhone or get your first (or next?) wearable? Sound off below!

Lisa Raphael
In her past professional lives, Lisa has served the masses as the Editorial Director at Brit + Co, Bieber Whisperer at J-14, Golden Girls Fan Club Prez at Lifetime and Talk Show Host Understudy to Katie Couric. Now, she's taking on the sports world at The Relish, teaching Hairography 101 in her spare time and will forever be trying to fill the hole Zayn Malik left in her heart.
Apple
Tech
Apple Wearable Tech