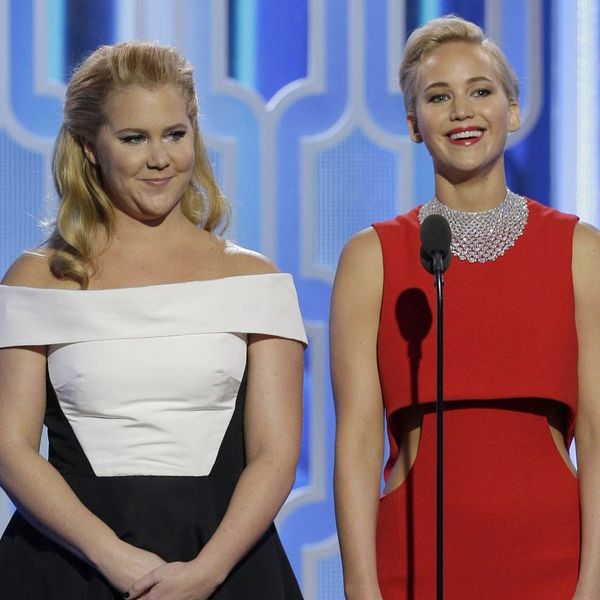 After pulling off the unthinkable, a secret wedding to now-husband Chris Fischer, Amy Schumer shared the news herself via Instagram. Now the comedienne’s BFF Jennifer Lawrence has spilled the beans on her friend’s surprise wedding, admitting that she sobbed during the couple’s vows.

“It was beautiful,” Lawrence told Entertainment Tonight. “It was very sudden, but it was, I was sobbing the whole — his vows were stunning. It’s when two people really love each other and they really mean it, it shows, and it was a beautiful ceremony and an amazing time. I couldn’t be happier for them.”

Schumer shared several behind-the-scenes snaps from her wedding, including a few of Lawrence in a button-down pink dress, which the actress pointed out to ET. “Notice my shirt was accidentally undone the whole time? In every wedding photo all of my buttons were undone. It looks like I was like, ‘Oh, you thought this was going to be about you?'”

Schumer and Fischer were married at a house overlooking the ocean in California on February 13. As seen in the many photos she posted from the wedding, she wore an embroidered white lace and tulle gown by Monique Lhullier, with her hair styled in loose waves and pulled back into a low pony.

Schumer used her Instagram stories to share snaps of her prep for the big day (sheet masks!) and her officiant, comedian John Early, dressed in a very ’90s wig and square French tip press-ons.

Thanks for these pics @marcusrussellprice and thank you @guyoseary for always being there and @bridgeteverett for singing your heart out.

Have you ever been to a surprise wedding? Let us know @BritandCo!

Kat Armstrong
Kat has been a writer, social media maven and mom for longer than she's willing to admit. She's also spent time in front of and behind the camera, interviewing celebs, politicians and acting as a producer for fashion and artistic photography shoots. When she isn't writing for various orgs and publications, she's hanging with her kids, husband and French Bulldog, Peter, in Toronto, Canada.
Celebrity Wedding
Celebrity News
Celebrity Wedding
More From Celebrity News