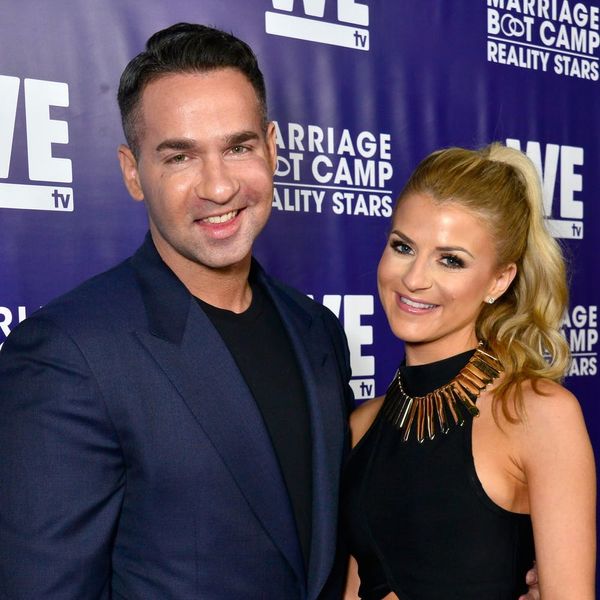 The Jersey Shore crew may still get up to their familiar old shenanigans on their rebooted MTV reality show, but there’s no question that they’ve grown up over the years. The latest member of the Shore family to settle down is Mike “The Situation” Sorrentino, who just announced that he’s engaged to girlfriend Lauren Pesce.

On the most recent episode of Jersey Shore: Family Vacation, Sorrentino spoke sweetly about his longtime love, telling his friends about his plans to propose. Following the episode, he let fans in on the good news that he had indeed popped the question, posting a gorgeous photo with his bride-to-be and captioning it — what else? — “GYM TAN WE’RE ENGAGED!!”

Fans have seen a whole new side of the Situation on 2018’s Jersey Shore: Family Vacation. The one-time party animal is now sober after attending rehab following the show’s initial end in 2012, and in early 2018, he pleaded guilty to tax evasion. He credits Pesce for sticking by him and keeping him in line all these years. The newlyweds-to-be were originally college sweethearts, but broke things off when Sorrentino joined Jersey Shore in 2009. They rekindled their romance after the show wrapped. “We are so proud and excited to share this chapter of our story with the world,” the reality star told Us Weekly.

Sorrentino will join his cast members Nicole “Snooki” Polizzi, Jenni “JWoww” Farley, and newlywed Deena Cortese as one of the married members of the group. Recently, Ronnie Ortiz-Magro welcomed his first child with girlfriend Jen Harley, adding to the growing number of second-generation Shore members.

Congratulations to the future “Mr. and Mrs. Situation!”

What do you think of the news that the Situation is engaged? Let us know @BritandCo!

(photo via Jerod Harris/Getty Images for WE tv)