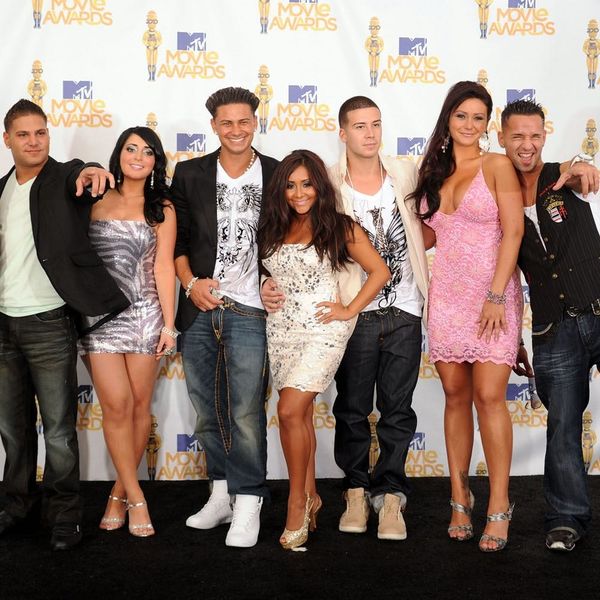 We were pumped when we found out that the OG cast of Jersey Shore (minus Sammi “Sweetheart” Giancola) would be reuniting this year for their own unique version of a family vacation. And this first peek at the action proves that things are going to be wild and weird — just like the old days.

🚨 Get ready to GTL, baby. JERZDAYS are returning to MTV with the premiere of #JSFamilyVacation on April 5th at 8/7c! See you there, @JerseyShoreMTV 🚨 pic.twitter.com/CLSayqtutn

With a dreamy beach scene in the background, the teaser starts by asking, “When the f*** they going?” The answer, it turns out, is SOON.

In between numbers counting down to the big “Jerzday” reveal, we see shots of what the crew will be up to when they get back together. Flashes of Nicole “Snooki” Polizzi and Paul “Pauly D” Delvecchio show that they’re not wasting any time embracing their new gig (and each other). We also see Deena Nicole Cortese, Jenni “JWOWW” Farley, Vinny Guadagnino, Ronnie Ortiz-Magro, and Mike “The Situation” Sorrentino in the mix.

While life has certainly changed for the stars — both Polizzi and Farley are moms now, Ortiz-Magro is about to become a dad for the first time, and Cortese is engaged — it looks like they all still have a wild streak that’s been waiting for an opportunity to resurface. We’d say this is just that opportunity!

And if the Twitter reactions to the teaser are any indication, fans are here for every moment of what will surely be one of the best reunions of 2018.

I can NOT wait. I hope snooki come through with some epic moments. It's all or nothing this there last chance (season) for "partysss here"

Will you be watching Jersey Shore Family Vacation when it premieres on April 5? Let us know @BritandCo!