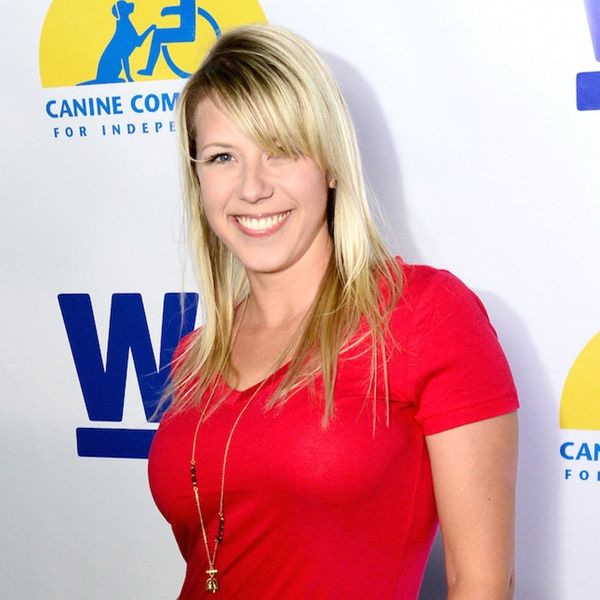 1. What better way to kick off your DWTS season than with a Full House parody? Jodie Sweetin — aka Stephanie Tanner, not that we need to tell you that — made her Dancing With the Stars debut last night, and she and dancing partner Keo Motsepe did a reenactment of the Full House intro, complete with that song you’ve known for what feels like your whole life. A quick scan of Twitter proved that Jodie had so much support from her TV family going into her first show. “Vote for my TV daughter,” Bob Saget tweeted, while Andrea Barber, aka Kimmy Gibbler, said that she “couldn’t be prouder.” Cute!

2. Adele trying to twerk is all of us. “My whole body moves, watch,” said Adele as she attempted the bum-shaking dance move on the London stop of her current world tour. “My bum could break my back it’s so enormous.” *Insert cry-laughing emoji here.* Of course, she looked insanely glamorous while being adorably goofy — so while we totally relate, Adele, you’re still the queen.

3. This actor burst into tears filming a scene with Lauren Graham for the Gilmore Girls revival. Girl, we feel you. Sutton Foster — otherwise known as the very Lorelai-esque Michelle from Amy Sherman-Palladino’s Bunheads (aka an amazing Gilmore Girls replacement during those Gilmore-less years) — has been brought in as a new character on the reboot, and she admits that it was an emotional experience. “It was just surreal,” she tells Entertainment Weekly, adding that when the scene was done, she bawled. While she wasn’t able to dish any further info, she did say she’d be in two episodes. (via EW, photo via Stephen Lovekin/Getty)

4. Here’s what drunk shoppers are likely to buy online on Friday nights. Ever have an after-work drink or two, then wander into some stores on your way home? And did you notice that when you do, you’re more likely to buy that coat you’ve been eyeing but responsibly avoiding? Racked did a survey of shopping data and found that 48% more orders are made at 2am on a Friday compared to a Monday, and that these orders mostly consist of expensive lingerie, dresses and heels. If only we could turn this habit into late-night too-many-glasses-of-wine bill paying. (via Racked, photo via Matt Cardy/Getty)

5. This photo of Chris Hemsworth hugging his twin toddlers will absolutely melt your heart. This isn’t the first time Christ Hemsworth’s wife Elsa Pataky has shared squee-worthy photos of their adorable family on Instagram, but this one just might take the cake. Crouched down and embracing the little blonde cuties Tristan and Sasha, Hemsworth looks smitten and so affectionate with his boys, who just turned two. “There’s nothing that makes me happier in life, than being a mum and watch you growing up everyday!” Elsa wrote. The two also have a three-year-old daughter, India Rose. (via @elsapatakyconfidential)

6. Quote of the day: “You can’t change who you are, but you can change your actions. My wish is that girls and women stop competing with each other and learn that we are our best allies.” — Kelly Osbourne for #IAmMogul