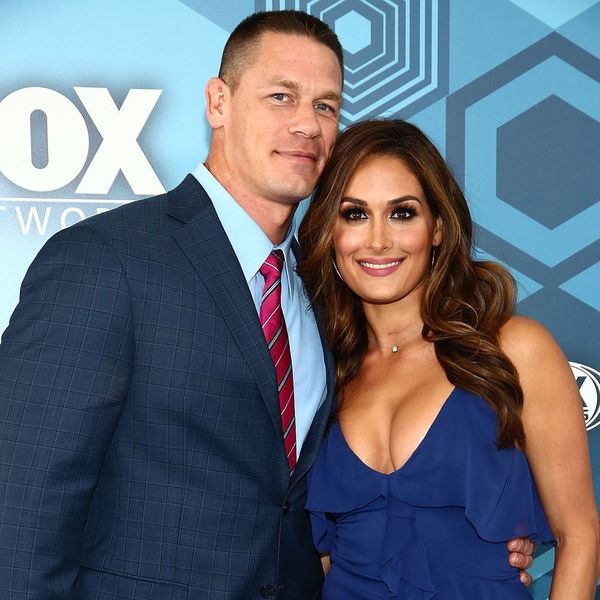 Here’s one that will go down in celebrity proposal history. Fans of E!’s reality series Total Divas and Total Bellas (and WWE) were likely crying happy tears last night as John Cena and Nikki Bella, finally, FINALLY, got engaged. And oh man, the ring was a total knockout.

It’s been a long time coming for the lovebirds, who began dating back in 2012. Much of the show has revolved around their relationship, including Cena’s reluctancy to marry again (he was once wed to his high school sweetheart).

I never thought I would use this emoji 💍❤ A dream come true! My Prince Charming has made me his Queen in a place we call home. I'll never, ever forget this moment!

He certainly didn’t seem to have any doubts last night, however, when he got down on one knee in front of fans following a tag team match against The Miz and his wife Maryse. Cena, 39, pulled out a HUGE round-cut diamond on a channel-set band.

The bride-to-be, 33, proudly showed her new bling off this morning on The Today Show, where the couple appeared to discuss their new relationship status.

When host Al Roker asked Cena what changed, he had just the right answer. “I found the right person. I found a person I consider an inspiration, an equal, somebody who picks me up,” Cena, who admitted that he had been planning the moment for a year and a half, said. “It took a person that strong to change my view on life.”

What do you think of Nikki’s new rock? Tell us over @BritandCo.

Nicole Briese
Nicole is the weekend editor for Brit + Co who loves bringing you all the latest buzz. When she's not busy typing away into the wee hours, you can usually find her canoodling with her fur babies, rooting around in a bookstore, or rocking out at a concert of some sort (Guns N' Roses forever!). Check out all her latest musings and past work at nicolebjean.com.
Celebrity Engagement
Style News
Celebrity Engagement Engagement Engagement Rings
More From Style News