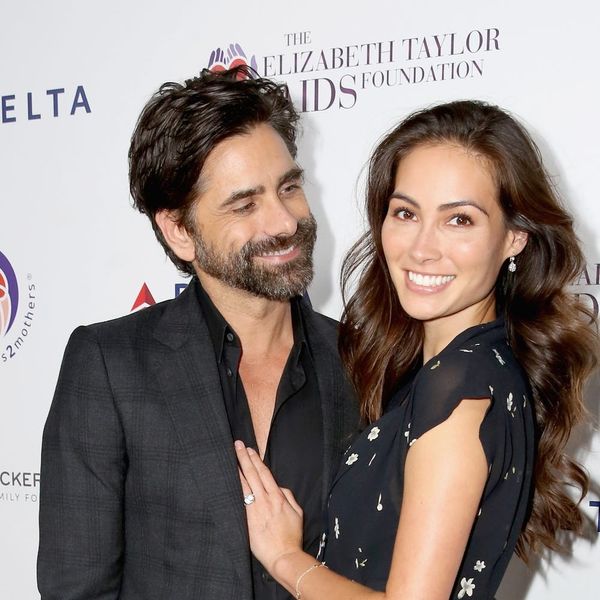 You might say that John Stamos and his new bride Caitlin McHugh have a history with Disney — the duo got engaged at Disneyland and even set up an ode to the House of Mouse at their wedding reception, which came in the form of a giant letter “D” written in the brand’s signature font. So naturally, it seems only fitting that the lovebirds would take things one step farther, embarking on their honeymoon at (you guessed it) Disney World Resorts!

According to E!, the pair arrived at the Happiest Place on Earth on Friday and was spotted dining at The Hollywood Brown Derby inside Disney’s Hollywood Studios, which invites diners to “step into the Golden Age of Hollywood at this warm, wood-paneled restaurant serving contemporary American cuisine.”

The newlyweds spent the weekend at Grand Floridian Resort & Spa, which McHugh documented with an adorbs Instagram snap in which she can be seen smiling from ear to ear and holding her growing baby bump. “#FixItFelixJr in Florida! #disneybound #wdw” she wrote.

An even cuter photo followed on Sunday, as the pair headed out to the Magic Kingdom in full-on Mickey and Minnie wedding regalia. While the former Vampire Diaries star paired her flowery boho-chic tunic and loose fishtail braid with white Minnie Mouse ears, which came complete with a mini white veil, her beau donned a denim vest, purple sunglasses, and black Mickey ears with the word “groom” embroidered on the ear.

Perfect way to begin our #happilyeverafter Can you guess who we’re #disneybound -ing as? (Hint: I’ve painted the walls in the tower in the background)

“Perfect way to begin our #happilyeverafter,” she gushed. “Can you guess who we’re #disneybound-ing as? (Hint: I’ve painted the walls in the tower in the background).”

The accessories made yet another appearance on the 54-year-old Fuller House star’s Insta feed, where he made us swoon with a photo of his wife of one week kissing him on the cheek in front of Cinderella’s illuminated castle. “#oneweek (and they said it wouldn’t last)” he joked in the caption, adding the hashtag #happiestmanonearth. Awwww!

#oneweek (and they said it wouldn’t last) #happiestmanonearth #happiestplaceonearth @waltdisneyworld

Here’s hoping the baby shower will be Disney-themed as well!

Would you want to honeymoon at Disney World? Tweet us @BritandCo.