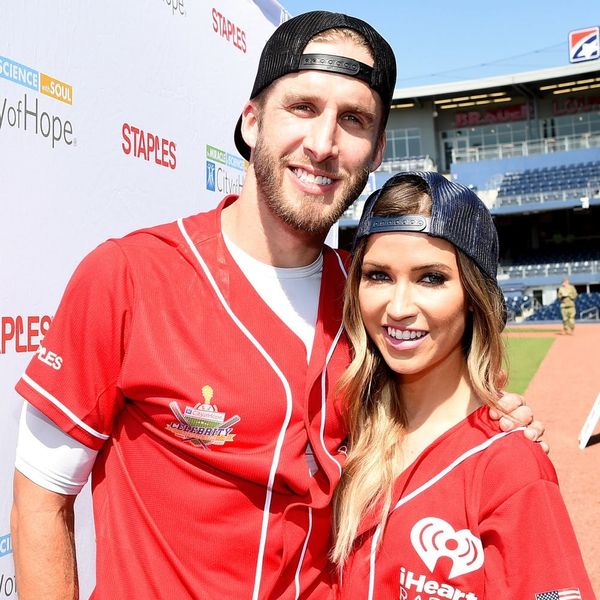 Kaitlyn Bristowe and Shawn Booth are one of the Bachelor franchise’s few success stories, but in recent weeks, fans have started to speculate about the status of their relationship. On Thursday, August 16, a little more than three years after getting engaged on season 11 of The Bachelorette, the show’s former leading lady spoke out about the split rumors that have begun to swirl around the couple.

“Shawn and I are 110 percent committed to each other and, yes, we are still together,” she said on her Off the Vine podcast with guest Spencer Pratt. She went on to explain that she and Booth are currently spending a lot of time apart because she’s visiting her family in Alberta, Canada, and he’s busy opening a new gym.

Eagle-eyed fans noticed that Bristowe had not been wearing her engagement ring in recent photos, and that she wasn’t “liking” her fiancé’s Instagram photos, either. Bristowe chalked up the online activity (or inactivity) to a self-imposed social media cleanse.

And although they are still together, Bristowe admitted that they have stumbles just like any other couple. “If you’ve ever been a person who is running a successful brand or business and a person who is doing the same but in a different career path, you know times can be tough,” she said. “You are both always away, you’re exhausted at the end of the day, sometimes the relationship isn’t being put first — but does that mean you call it quits? No. You love the sh*t out of each other and you work through it.”

Bristowe chose Booth over second-time runner-up Nick Viall on season 11 of The Bachelorette in 2015. While the couple held off on any immediate wedding plans, they recently said they would eventually be open to a potential TV wedding.

What do you think about the rumors around Kaitlyn and Shawn? Let us know @BritandCo.

(photo via Rick Diamond/Getty Images for City Of Hope)