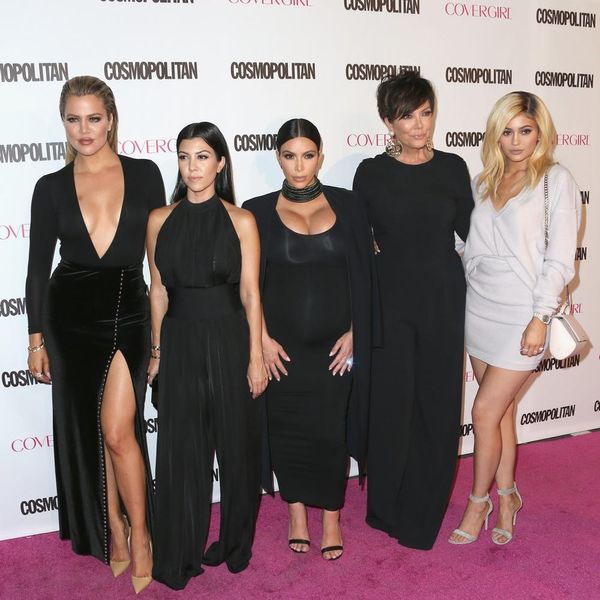 Despite Kim Kardashian saying she was done with the family Christmas card after last year’s drama, she and some of her sisters decided to go ahead and release a holiday photo anyway. On Monday, December 24, Kim and Khloe took to Instagram to debut their 2018 card, which features the two of them with sisters Kourtney and Kylie, plus their eight kids and brother Rob’s daughter Dream.

In the pic, Khloe, Kourtney, Kylie, and Kim sit on a white bench with Kourtney’s kids Mason, Penelope, and Reign; Rob’s daughter Dream; Khloe’s daughter True; Kylie’s daughter Stormi; and Kim’s kids North, Saint, and Chicago. All 13 are in white outfits, to match the bench and the white background. Missing from the photo are Rob, Kendall, Kris, and the sisters’ significant others.

“This year we waited until the last minute to do a card,” Kim wrote in her caption. “Schedules were changing, my husband [Kanye West] was in and out of town. … Kendall and my mom rushed to a meeting after this shoot, so this is what we have! As many of us as possible!”

Khloe further explained Kendall’s absence in response to someone who commented, “Poor Kenny,” on the post. “Why poor Kenny? She was at the shoot and she chose not to be in the picture because she thought it was cuter that it was just the babies and the mommies,” she shared. “Man, you guys are dramatic even for a f-cking Christmas card! Lol, damned if we do and damned if we don’t. Just enjoy the f-cking photo. Obviously they are our brothers and sisters so I think we know what everybody is comfortable with. MERRY CHRISTMAS.”

Khloe first teased the card a few days ago, when she wrote on Twitter that one would be “coming very shortly.” Still, the photo came as a surprise to some fans, since Kim told E! earlier this month that there were no plans for a card in 2018. “I have to say, [partly] in thanks to last year’s Christmas card, that really did just f-ck us over. That was so dramatic,” the KKW Beauty founder explained, alluding to the feud that sparked between her and Kourtney.

Besides that, she added, “Kris Jenner has given up. She just is like, ‘I don’t have the energy to wrangle all my kids anymore, and their kids.'”

Last year’s card broke from tradition a little: Instead of one big family photo, Kim released a new picture every day for 25 days. As with this year’s card, not everyone participated. Both Rob and Kylie — who was pregnant at the time and trying to keep it a secret — opted out.

Do you do an annual holiday card? Tell us @BritandCo!