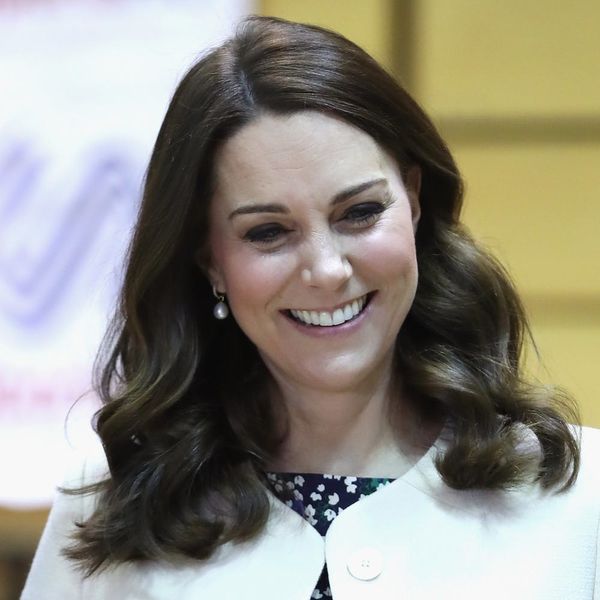 Kate Middleton’s third pregnancy has been marked by some serious fashion *moments* — from the ethereal Alexander McQueen capelet dress she wore back in February for dinner at the Norwegian palace to the forest green Jenny Packham gown she opted for at the BAFTA Awards, the Duchess of Cambridge has been bringing her maternity style A game. As confirmed by Kensington Palace in a statement, she made what will be her very last appearance before the baby’s arrival this morning, and while she looked gorgeous as ever, she also chose to switch things up, wearing skinny jeans.

En route to Copper Box, a sporting arena in Stratford, to meet up with national charity SportsAid Team (a group of Olympic, Commonwealth, Paralympic, and World Champion hopefuls), the mom of George, 4, and Charlotte, 2, wore a cream Goat coat, a Hobbs London Rosie Top ($111 USD, sold out), black pumps, and a pair of fitted black skinny jeans.

We have, of course, seen Middleton, 36, in pants before — just last June, she stepped out in navy clam diggers for a sailing roadshow event in London. She also donned slacks to visit Range Rover’s production line last year (below) and at the Olympic Games back in 2012.

Still, it’s not a common style choice, with the soon-to-be mommy of three typically sticking to her perfected combo of a dress, tights, and elegant coat.

What do you think of Kate’s last pre-baby look? Share with us over @BritandCo.

Nicole Briese
Nicole is the weekend editor for Brit + Co who loves bringing you all the latest buzz. When she's not busy typing away into the wee hours, you can usually find her canoodling with her fur babies, rooting around in a bookstore, or rocking out at a concert of some sort (Guns N' Roses forever!). Check out all her latest musings and past work at nicolebjean.com.
Celebrities
Celeb Style
Celebrities Celebrity Style Kate Middleton Kate Middleton Style Maternity Royal Baby Royal Family Royal Style
More From Celeb Style