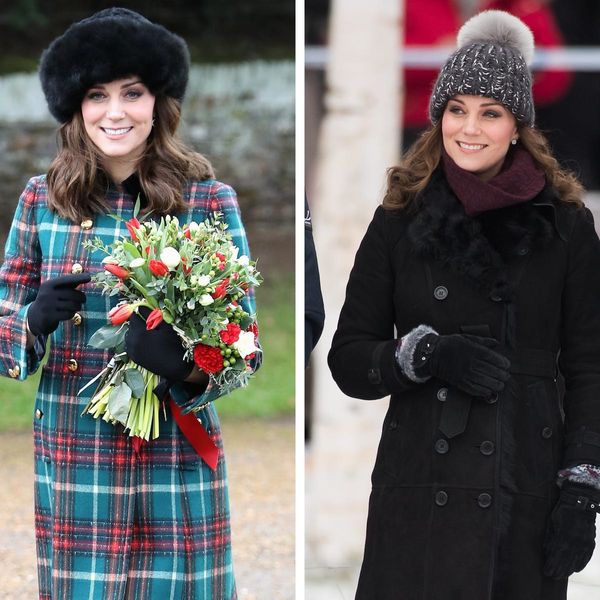 Despite the blisteringly cold winter months, an expectant Kate Middleton has been dutifully fulfilling her many, many royal engagements. Luckily, to keep warm, the Duchess is always bundled up in a trendy topper. Given that she's one of the foremost fashion influencers of today, it's no surprise that her coat closet is extensive. We've ranked all 17 of her winter outerwear choices thus far — scroll ahead to see which one we picked as number one!
17. The Duchess of Cambridge wore this baby blue coat by maternity designer Séraphine on a visit to Kings College on January 24, and while blue is definitely one of her colors, this hue is the least flattering of the azures in her coat arsenal. (Photo via Neil Mockford/GC Images)
16. The royal blue coat on her February 7 appearance to open the Action on Addiction Community Treatment Centre by one of the Duchess' fave outerwear brands Goat is definitely more up her alley. It's fitted and chic and makes quite a statement. (Photo via Max Mumby/Indigo/Getty)
15. It's not every day you see Middleton in black, but she went with a more casual outerwear look by Burberry while on a state visit to Sweden, where she watched a game of bandy hockey (hockey played with a ball) on January 30. (Photo via Samir Hussein/Samir Hussein/WireImage)
14. The expectant mama kept things casual for a snow day on their official visit to Sweden and Norway by wearing this sporty red and white activewear jacket by Swedish brand Kjus on February 2. (Photo via Pool/Samir Hussein/WireImage)
13. The 36-year-old also donned a more conventional dress coat style on the same day with a burgundy coat by Dolce & Gabbana with big gold military-style buttons. (Photo via Samir Hussein/Samir Hussein/WireImage)
12. We love it when Middleton takes fashion risks, and that's exactly what she pulls off here on January 16, when she wore a HOT PINK overcoat by Mulberry on a visit to Coventry Cathedral. The best part is this coat is recycled from her closet from her last pregnancy. (Photo via Karwai Tang/WireImage)
11. The pregnant royal again opted for a maternity coat, this time Séraphine's Marina Maternity Coat ($495) in a plum tweed, for her December 12 appearance with Magic Mums. (Photo via Max Mumby/Indigo/Getty)
10. We always appreciate it when the buttoned-up royal family lets loose a bit, which is why this easy, olive green wax jacket by Barbour is in our top 10 best looks for Kate Middleton. She wore this outdoor-friendly number for a school gardening event at Robin Hood Primary School on November 29. (Photo via Max Mumby/Indigo/Getty)
9. Number nine on our list is this teal blue look by Catherine Walker, which the mom of two wore during her visit to Oslo, Norway on February 1. Paired with furry gloves and a fur hat, this coat looks extra elegant and cozy. (Photo via Nigel Waldron/Getty)
8. Middleton chose a sure-to-please navy blue coat by Hobbs for her first event of 2018, a visit to Reach Academy Feltham on January 10. (Photo via Eddie Mulholland/AFP/Getty)
7. Talk about power dressing! Middleton definitely commands all the attention decked out in bright red. She wore this Boden design to a visit to the Great Ormond Street Hospital on January 17. (Photo via Max Mumby/Indigo/Getty)
6. There's something both regal and Sherlock-ian about this L.K. Bennett Check Coat (which promptly sold out) that she wore to the Children's Global Media Summit on December 6. (Photo via Eddie Mulholland/AFP/Getty)
5. Now we're entering the top five, and to kick us off is the look the Duchess wore to a somber occasion, the Grenfell Tower national memorial service on December 14. She chose a dignified navy blue Carolina Herrera pleated coat for the occasion. (Photo via Max Mumby/Indigo/Getty)
4. Moving on to happier days, in number four, we have the TROY London hunter green coat she paired with black faux fur cuffs and a black faux fur lapel. The future queen consort wore this look on a visit to the Nobel Museum on January 30. (Photo via Pool/Samir Hussein/WireImage)
3. Our top three pick is this whimsical red and white houndstooth coat by Catherine Walker, which is very reminiscent of a style her late mother-in-law Princess Diana favored. Middleton wore this on day two of her visit to Sweden on January 31. (Photo via Karwai Tang/WireImage)
2. Number two on our list is none other than the Duchess of Cambridge's red and green tartan Christmas coat. Made by Miu Miu, this now-iconic outerwear retails for a whopping $2,198 (and is predictably sold out). But hey, Christmas only happens once a year! (Photo via Chris Jackson/Getty)
1. We have reached number one! Middleton visited Roe Green Junior School on January 23 wearing this Sportmax coat, which she paired with a Séraphine maternity dress, a Beluah London scarf, suede pumps, and a pair of sapphire earrings. EVERYTHING about this monochromatic look just meshes — and blue really IS her color. (Photo via Karwai Tang/WireImage)

From Your Site Articles
Kimberly Wang
Kimberly Wang writes about all things pop culture, tech, style, and beauty. She's a Bay Area transplant and has an MFA in Creative Writing from Columbia University. On a sunny New York day, you can find her hanging out with her mini schnauzer Isabelle Jellybean on a blanket in Central Park.
Celebrity Style
Celeb Style
Celebrity Style Kate Middleton Royal Family Winter Style