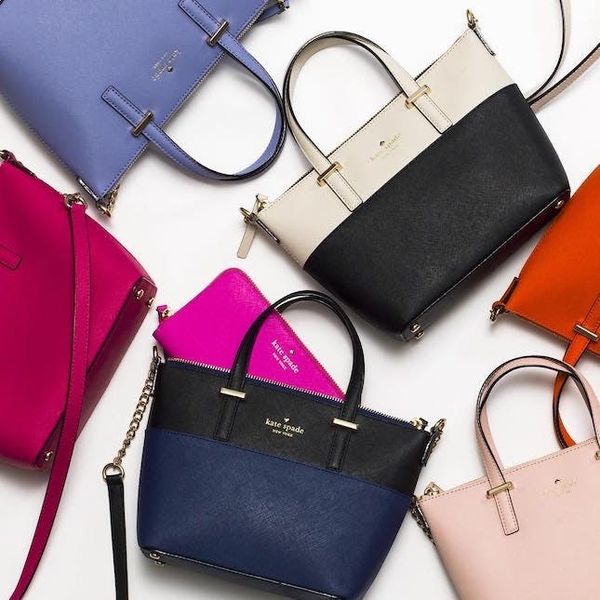 Though Kate Spade may be your favorite place to shop for cute bow adorned purses, earrings and coffee mugs that justify you eating cake for breakfast, Kate Spade the designer, who actually founded her eponymous company, has been out of the picture for some time now. After founding Kate Spade New York in 1993 with just one super popular black nylon handbag line — Charlotte from Sex & the City definitely had one — Kate and her husband Andy exited the business when Liz Claiborne acquired the company from the Neiman Marcus Group in 2006.

Though it’s not her own name, Frances Valentine’s name is still extremely significant. Kate and her husband Andy welcomed their daughter Frances Beatrix in 2005. As for Valentine, the name was her grandfather’s middle name “because he was born on Valentine’s Day,” she explained in an interview with Women’s Wear Daily.

The line itself includes bucket shoppers in metallic leather and canvas, envelope-style clutches priced between $225 to $725, Mary-Jane espadrilles and snakeskin sandals that cost $400 a pair. As for now, that is all they will be selling. Spade told Women’s Wear Daily, “Someone else said, ‘Oh, I really expected guns-a-blazing, that you were going to come in with a whole lifestyle brand,” said Kate. “I said, ‘No, we wouldn’t do that.’”

Fellow prepsters, set your calendars. The line launches in January 2016.

Will you be checking out Kate Spade’s campaign? Tell us in the comments below!

Meredith Lepore
Meredith is a freelance writer/editor who writes for Levo League, Bustle, Refinery 29, Instyle.com as well as magazines including Marie Claire, SELF, Women's Health and Cosmopolitan. Before going freelance she was Editor in Chief of the women's career site The Grindstone. She earned her Masters in Magazine, Newspaper and Online Journalism from the Newhouse School at Syracuse University. Meredith resides in New York full time and enjoys SoulCycle, jogging and playing with her Yorkshire Terrier Otis, who also loves SoulCycle.
Bags
Fashion
Bags