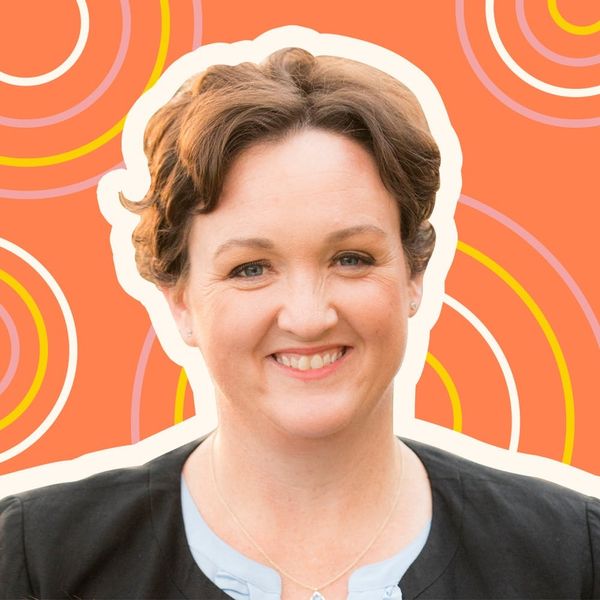 This coming November will be rife with close races, and the CA-45 race for Congress — one that experts believe could be make or break for the 2018 “blue wave” — is one of them.

Katie Porter, the Democratic nominee in this district, is best known for her record as a consumer protection attorney — and, of course, being Massachusetts Sen. Elizabeth Warren’s protégée. But for many women in the US, Porter is at her most relatable when she describes what it’s been like to be a working mother of schoolchildren while running for office. While Porter says her children have been involved in her campaign and love their role in it, child care has also been an important part of her platform.

“I get asked all the time, ‘What will happen to your children if you win?’” Porter says. “And the answer, of course, is, ‘I will still be their mom, I will still take care of them, be there for them like I have been every day of their lives.’”

In her experience, Porter hasn’t seen many male candidates on the campaign trail asked this question. “It’s because of the assumption that there is a partner, usually a wife, who will pick up the extra burden of when someone serves in Congress,” she says.

Only 20 percent of current US Congresspeople are women, many of whom ran for office after their children were fully grown. But if she defeats Republican incumbent Mimi Walters in November, Porter’s victory would come less than a year after Illinois Sen. Tammy Duckworth became the first sitting senator to give birth in office. She acknowledges that the issue of affordable child care is one that Congress has long been nearly radio silent on, but she has an idea of what the solution to this might be: representation. And her election to Congress come November could be an apt starting point.

B+C: What inspired you to run for Congress?

Porter: It was really watching on election night: People in this community were upset about Donald Trump, but not seeing how our own representative, Mimi Walters, had been failing us for two years. There was a huge opportunity to highlight why Mimi Walters was letting us down, and to be a better representative and really fight for Orange County families.

Big issues that we’re talking about, what families are worried about, are the devastating financial shock that’s going to be created by Trump’s tax bill, which Mimi Walters was the only Orange County Republican to support. That tax law, a tax scam, is an attack on California that singles us out.

We talk about health care a lot, both protections for pre-existing conditions and the high price of pharmaceuticals, needing to protect Medicare from cuts that might be forced by the reckless tax plan. And we talk a lot about gun violence prevention. The continued school shootings across the country and loss of young lives and lives generally, is a top issue, and it cuts across party lines.

And the last issue we talk a lot about is the environment. This district is about half preserved land, and we’re only a couple miles from some of the most beautiful beaches in the world. My opponent signed onto a letter to urge the secretary of the interior to open Orange County’s beaches to offshore drilling. Clean energy jobs are one of our fastest growing industries here. And so both for our environment and economy, her environmental policy is really harmful to families here.

You’ve worked closely with Senators Elizabeth Warren and Kamala Harris, even prior to this campaign. Who are some of the women in politics who inspire you?

Both Senators Warren and Harris have been amazing mentors to me, not just in this campaign, but in the course of my career. I was Elizabeth Warren’s student in law school; I got to learn from her and work side-by-side on research that we went on to do together about families and bankruptcy. We testified side-by-side in Congress on a bill that was enacted to crack down on abusive credit card fees. And so, really having that close mentorship relationship, she was really modeling for me what it looks like to champion families, be on the side of a fair economy.

Senator Harris gave me the opportunity to work directly for the people of California. She really modeled for me something that I take to heart every day on the campaign trail, which is that what you owe the people that you serve is actual change in their lives. It’s not promises that you make on paper, it’s actually what you deliver to help people in their real lives. And so, when I talk about issues like gun violence prevention or campaign finance reform, these are not empty words. These are real promises we have to deliver on, when I’m elected in November.

Both of them, their courage is what really stands out to me. The courage to speak out, to speak up, and to support other women and believe in the power of women using their voices, their energy, their talent and their time to make a positive difference.

I didn’t expect to wind up in the emergency room while running for Congress, but when my appendix burst, quality healthcare literally saved my life. pic.twitter.com/0v3epFV1kq

You speak often about being a working mother and someone who has survived domestic abuse. Do you think these experiences would shape your perspective and goals in Congress?

Everyone comes to Congress with their own life experiences, and I am thrilled that in this election, we are seeing a group of candidates — I am one of them — who are bringing some of the voices and life experiences that have been absent from Congress. Millions of Americans suffer domestic violence, and that’s a sad experience, a painful one, but one we need to be talking about and figuring out policies to prevent it and help survivors and families move beyond it.

And being a working parent, when I’m on the campaign trail talking about child care, I am literally thinking in the back of my mind about who’s caring for my kids right now, if I’m going to make it home at the promised time, and so, I’m thinking about these issues every day because I’m balancing work and family. And I do think women, generally, experience the work-family balance differently.

We see that when people have a second or third child and the child care costs push one parent out of the workplace, because they simply can’t earn enough to afford it, it’s often the woman who steps out of the workforce. I always support parents making their own best choices for their families, but I would like for a system where child care costs aren’t dictating people’s choices about when to work and feed their families. Instead, we should unleash the incredible talents of women — and men — in the workforce by ensuring we have affordable and accessible child care.

You and Mimi Walters are both women candidates at a time of unprecedented numbers of women running for political office. How do you believe you and Walters would serve women differently if elected?

I think it’s really important to fight for and respect the freedom of women to make their own choices. And what we’ve seen with Mimi Walters is the opposite. She’s voted 24 times in her career as an elected official to take away or restrict women’s right to choose.

We know the issues that are really important to women. Gun violence prevention, environment, clean air — she’s on the wrong side of those issues. Representing all of your constituents, including women, is about fighting for the things that really matter in their lives, like health care, a fair wage. It’s not enough to do one narrow issue bill and announce you’re a champion for women. A real champion for women governs every single day thinking about the fact that 50 percent of our country is women, and all of the issues we talk about, whether it’s taxes or foreign policy, affect women’s lives just like they do men’s.

And speaking of unprecedented numbers of women running for office, what advice would you give to young women who want to get more politically involved in their communities?

I’ve seen, particularly in our campaign, the opportunity for leadership that campaigns offer women. I encourage young women to get involved and never doubt that they are a critical part of a campaign.

One of the things that I always push back on is when people and women say, “I don’t know if I have the skill set to do this.” If you’re living in this country and you care about the future of this country, then you can and should be part of the political process and the change we’re going to make in November.

I would say to women, absolutely get engaged, and particularly to women who have children — my children have loved this campaign. They have learned a lot about the issues, they’ve enjoyed talking to people in this district, they are proud of me, and it has been a very positive experience for them. I think women should think about how can they find a campaign opportunity, political opportunity, policy opportunity, that they can do with their children, and really model for their kids what it means to be engaged in our democracy.

What are some ways people in your district and across the country can help your campaign?

This is going to take energy from across the nation to win this district. This is going to be one of the most competitive races across the country, and it’s been called the bellwether race that will determine control of Congress. And so, anyone who can help from across the country, we welcome their help. They can make remote phone calls, do persuasive texting from wherever they are, even come here for a week or a day — we have people who have moved here for a month, rented a house to give their time knocking on doors!

Our campaign is proud to be powered by grassroots contributions, and every dollar that comes into this campaign is one that we’re using to reach out to voters, talk to voters about the issues they care about, and make sure people turn out and vote in November. Our website is www.katieporter.com, and offers ways to get involved.

We’d love to have as many people across the country cheering us on, standing with us in this race, as we can.