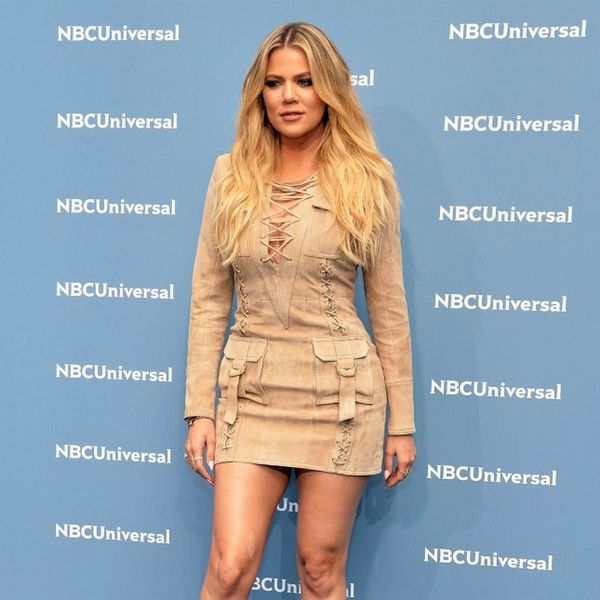 Another day, another inappropriate comment rears its head from Presidential Candidate Donald Trump‘s past. Of course, as a reality television star, there’s loads of old footage from Trump’s missteps as the host of The Apprentice, and now, Khloé Kardashian is feeling the sexist Trump sting. KoKo sat down with Terri Seymour on Extra, and they talked about a now-infamous comment that has the Kardashian joining the political news cycle.

In the interview, Terri asks Khloé about Trump’s comments on The Celebrity Apprentice, when she was called a “fat piglet” before being fired. Koko remained cool about it, commenting, “For Trump or any human being to judge someone off looks alone… I think that’s really immature and cruel.” She then jokingly added, “Why am I dragged into everything!?” before moving on to other topics.

While Khloé has been promoting her new denim collection, she’s had to field questions about sister Kim and now Trump’s gross mention of her body. Khloé’s response was actually pretty even, and she didn’t get as angry as she rightfully could have. Hopefully we won’t learn of even more degrading comments the Presidential GOP nominee has said in the past, but we’re not counting on it.

What do you think about Trump’s comments about Khloé’s body? Let us know @BritandCo!

Kat Armstrong
Kat has been a writer, social media maven and mom for longer than she's willing to admit. She's also spent time in front of and behind the camera, interviewing celebs, politicians and acting as a producer for fashion and artistic photography shoots. When she isn't writing for various orgs and publications, she's hanging with her kids, husband and French Bulldog, Peter, in Toronto, Canada.
Kardashians
Celebrity News
Kardashians Politics
More From Celebrity News