Morning Buzz! Khloe Kardashian Is FINALLY on Snapchat and Has a Special First Guest + More 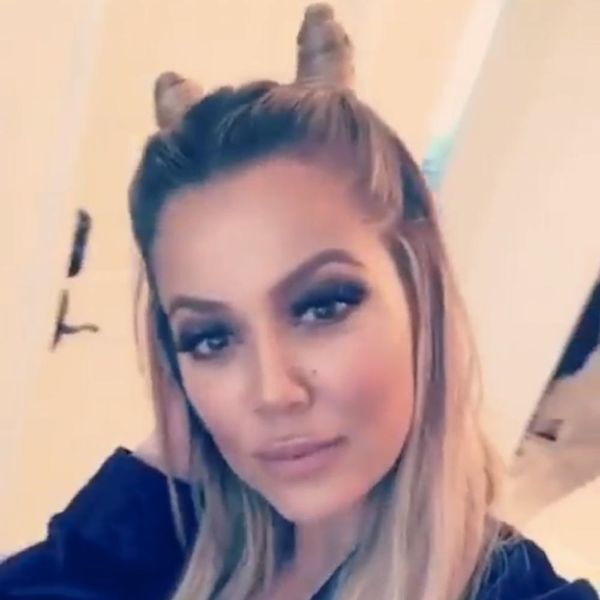 1. “This is so scary, my very first Snapchat,” the last (but not least) Kardashian/Jenner sister says in her first Snap. “But I found a good filter, so it’s all good.” She posted a handful more, mostly playing around with some filters and talking about how she can smell herself because she just got a spray tan (never change, Khlo). In one Snap, she reveals her “very first co-star,” estranged husband Lamar Odom. “What’s good, homie?” he says as she pans the camera to him, both looking wonky thanks to the alien-head filter. “That’s it?” she asks. Khloe, Snapchat is a marathon, not a sprint. We accept this one to be the gift that keeps on giving. (via @khlosnapchats)

2. James Franco celebrated his birthday by dressing up as David Bowie and going to Disneyland. Because James Franco. Someone should probably tell him this isn’t exactly how you dress in disguise to go out in public… (via ET, photo via @neverlannder_)

3. Lena Dunham is as frank as ever in an update on her endometriosis surgery recovery. About a month ago, Lena revealed that she was recovering well from the sudden surgery she had to have as a result of her painful endometriosis. Now, she’s well enough to be back at it, speaking and being honored last night at the Blossom Ball organized by the Endometriosis Foundation of America. Speaking to People, Lena admits that “I got much more rest time than the average woman with endo would probably be permitted, considering my job. I have been treating myself like a delicate, delicate flower.” Now go forth, Lena, and film the sixth and final season of Girls in good health! (via People, photo by Dimitrios Kambouris/Getty)

4. Bask in this photo of Luke and Jess back together on the set of the Gilmore Girls reunion. BASK IN IT. Uh, hey Luke. Is that a tux? FOR A WEDDING??

5. This duck can walk again, thanks to new 3D-printed feet. After losing both of his feet to frostbite, this li’l duck in Wisconsin gets to waddle once more thanks to technology (and resourcefulness). Life is so beautiful sometimes, you guys.

6. Quote of the day: “People sometimes used to say, ‘Why don’t you guys do a series together?’ or whatever. And the funny thing is that I think we both know this to be true; it’s because we’re actually both alphas. So, it works in shorts spurts, but I don’t know if it would make a real dynasty.” — Tina Fey on why her and Amy Poehler don’t work together more. (via People)