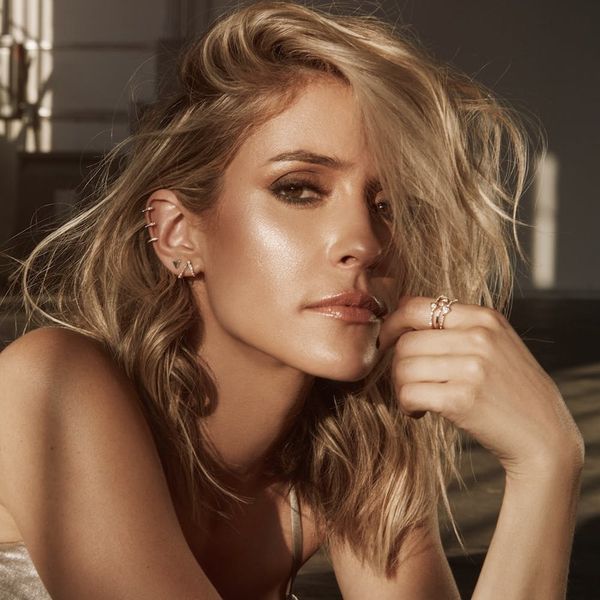 Kristin Cavallari is an absolute powerhouse of a businesswoman juggling being a wife, a mother, a cookbook author, a TV host for E!’s red carpet shows, and the designing force behind not one, but two different lines — a shoe collection with Chinese Laundry and her new jewelry brand, Uncommon James.

She’s gearing up for the launch of her Fall/Winter 2017 jewelry collection on August 31 — a more fine-tuned version of the dainty Spring/Summer line she debuted in May. “With every first [collection] there’s a learning curve,” she tells us of the 17 pieces that range from $39 to $72. Case in point? Choosing to replace the white boxes that originally housed the bauble with pouches. She’s also been able to hone in on what ladies want when it comes to her goods. “I had two statement pieces [in the first collection]. Those didn’t do as well,” she explains to Brit + Co. “Modern women want effortless, dainty, mix and match jewelry that goes with everything.”

Now, she considers those minimal pieces the cornerstones of Uncommon James. “If it doesn’t fall into those categories I’m really not gonna do it,” the entrepreneur, 30, says. As a result, the collection includes plenty of layer-worthy necklaces and geometric earrings.

It’s a nice change of pace for Cavallari, who has been working with Chinese Laundry on her namesake line of footwear since 2012. “Uncommon is mine — it’s just me,” she says. “I’m the boss, I have complete creative freedom.” While the reality alum also gets final say when it comes to her shoes, in that partnership, “I’m answering to a lot of other people. Having [this] freedom is so rewarding.”

Red lips and new fave jewelry, that means the new @uncommonjames collection launches in one week! Doing a pop up in LA the 29th and 30th at 901 Academy Salon 4-6!!! See u there!

For the Laguna Beach alum, who cites Kate Moss (“Always and forever!”) and Hailey Baldwin as her fashion muses, designing each seasonal collection that reflects her own aesthetic has been “a dream come true.” Of course, none of the Uncommon James jewelry quite compares to her favorite piece in her personal collection — the five-carat engagement ring she received from her quarterback husband Jay Cutler not once, but twice.

Though there’s currently more than 800 miles between the lovebirds (The Balancing in Heels author is hunkered down with their three kids Camden, Jaxon, and Saylor in their new home in Nashville, and Cutler is prepping for a season with the Miami Dolphins), Cavallari is still getting plenty of face time with her man — literally. “It really hasn’t been that bad. We FaceTime all the time,” she shares, noting that the family will make the trek to Miami for home games. “We’ll see him a lot.”

And he's off...but this time as a dolphin 🐬 so excited for my man on this next journey #MiamiDolphins 📸: Cam Cutler

Regardless, Cavallari says it’s their trust for one another that makes their current long-distance sitch work. “We have such a great foundation,” she shares. “I’ve never trusted anyone [the way I trust Jay]. Of course we miss each other… [but] it’s such a short window in the whole grand scheme.”

In the meantime, she has plenty to keep her busy — in addition to settling into their new city after making the move from Chicago (“I just started the new mommy friend kind of space”), she’s also got a cookbook coming out come spring titled True Roots: A Mindful Kitchen With More Than 100 Recipes Free of Gluten, Dairy, and Refined Sugar ($23). “It truly was a passion project,” she reveals. “It’s how I cook 80 percent of the time.”

Between the book’s accompanying tour, a small seven-piece Uncommon James holiday collection that’s set to launch in November, AND awards season (Cavallari hosts the Emmys red carpet on E! with Brad Goreski), she’s got a schedule that would make most anyone’s head spin. “Both my boys are in school now, so that helps a lot,” she explained, adding that she’s also got the help of her mother-in-law while Cutler is away, a nanny, and Cutler himself when he’s not.

Check out the best picks from Cavallari’s line below and shop the line in full here.

1.Illicit Ring ($42): Cavallari took the two-finger ring trend and made it her own. “[It’s] just very minimalistic, just a little hint [of bling]. Anyone can wear it,” she says.

4.All Day Necklace ($49): The stye is made for layering, a trend that Cavallari has mastered. “I would do all different lengths, a couple different chokers and one longer, just [above your] décolletage,” she says.

5. Alpas Bracelet ($54): Cavallari stacks two of these together in the promo shot for an edgier look.

What’s your favorite piece in Kristin’s new collection? Share with us @BritandCo.

Nicole Briese
Nicole is the weekend editor for Brit + Co who loves bringing you all the latest buzz. When she's not busy typing away into the wee hours, you can usually find her canoodling with her fur babies, rooting around in a bookstore, or rocking out at a concert of some sort (Guns N' Roses forever!). Check out all her latest musings and past work at nicolebjean.com.
Celebrity Style
Style News
Celebrity Style Jewelry
More From Style News