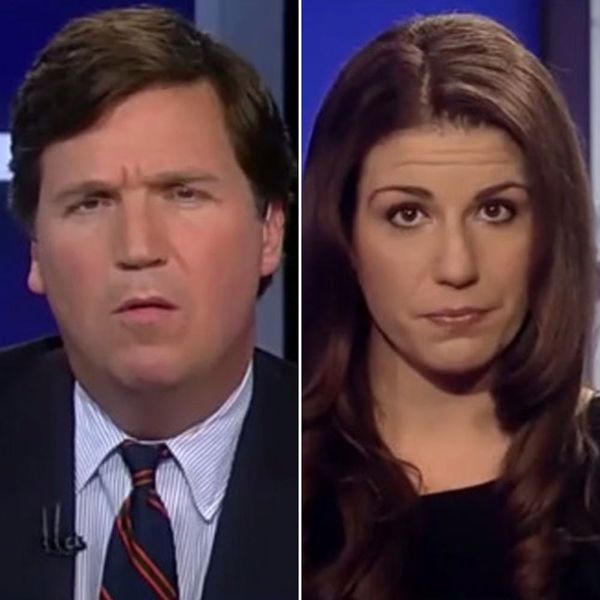 On Friday night, Fox News host Tucker Carlson had Teen Vogue’s weekend editor writer Lauren Duca on his show Tucker Carlson Tonight to discuss whether or not it was appropriate for Dan Goldstein to shout at Ivanka Trump on that now infamous JetBlue flight. Earlier in the day, Luca posted this tweet about the controversy:

It caught the attention of Carlson and the show’s producers. But at a mere three minutes into the interview, it’s obvious that Carlson didn’t really have much interest in actually having an open conversation about the controversy. Instead, it seems he just wanted a forum to attack her and her credentials publically. We encourage you to take a few deep breaths and watch the interview in full below.

Throughout the 10-minute segment, Carlson and Duca discuss the JetBlue situation. And here’s the thing: They agree! Both believe an airplane is not the appropriate place to confront Ivanka about her involvement in politics. They also agree that Ivanka has the opportunity to play a pivotal role in her father’s presidency and that she should be held accountable for that. But Carlson doesn’t want to acknowledge that they are on the same page. He reaches past the issue at hand to discuss other comments Duca has made about President Elect Trump, specifically about his proposed ban on Muslims and the psychological effect he has had on the public. To put it bluntly, he is demeaning, and blatantly sexist towards Duca. But Duca responds like an absolute pro.

Bravo @laurenduca 👏! Welcome, men, to what life is like for female journalists who write about more than one subject https://t.co/3IN7NQbXZF

Carlson quickly makes it apparent that he doesn’t believe Duca is actually apt to discuss anything beyond entertainment. At one point, when referencing a piece Duca wrote about Trump and Muslims, he says to Duca, “You wrote this piece in Teen Vogue, which I guess you write for.” Duca is quick to respond, “Oh, you guess? That’s really patronizing […] Your producers asked me if I write for Teen Vogue. You have my article in front of you. My name is Lauren Duca and I write for Teen Vogue.”

It should be noted that Teen Vogue is not just a magazine packed with prom dresses and beauty tips. The publication’s relatively new editor-in-chief Elaine Welteroth has been overhauling Vogue’s little sis to include hard-hitting news and political journalism. And overall, it’s not only been well-received by its audience but commended by other notable publications like The New York Times and Bloomberg. But apparently, Tucker Carlson didn’t take the time to read any of those pieces before inviting Duca on his show.

.@TuckerCarlson is an enemy of rational discourse. In this fraught moment, his bully tactics are profoundly damaging, and achieve nothing.

He calls her “moronic” and also makes sure to share that Duca has also recently written about Liam Payne and Ariana Grande, alluding to the fact that this makes her inept to discuss Trump and political matters. But *SHOCKER* writers (and women for that matter) actually do have the capacity to be well-versed in a range of topics and issues. To this blow, Duca boldly tells Carlson, “A woman can love Ariana Grande and her thigh-high boots and still discuss politics.” He wraps the interview by telling Duca, “You should stick to the thigh-high boots, you’re better at that.”

While the interview has gone viral over the weekend, Carlson hasn’t made a direct comment about the exchange. He has only posted these two tweets quoting Duca.

.@laurenduca: It's sinister for @ivankatrump to capitalize on feminism while supporting candidate who is most anti-woman candidate –TCT

Cortney Clift
Cortney is the senior writer and special projects editor at Brit + Co. She typically covers topics related to women's issues, politics, and lifestyle. When she's not buried behind her computer you'll find her exploring New York City or planning her next big adventure.
Feminism
Politics
Feminism