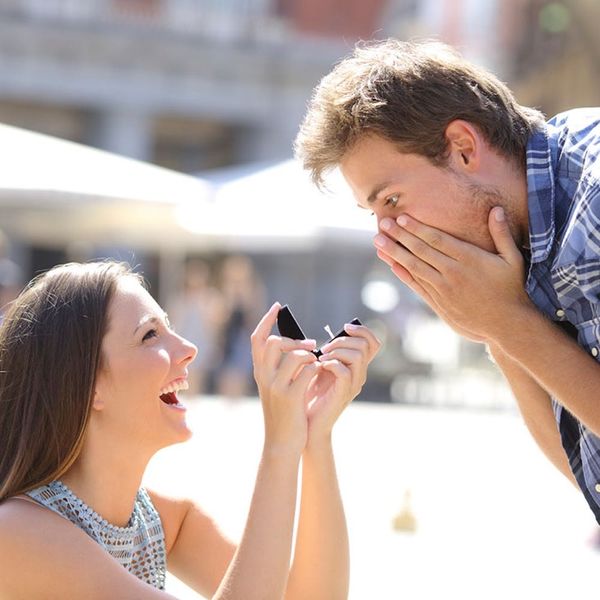 Traditionally, marriage proposals tend to be something men are tasked with. Finding the ring, planning a creative way to ask, all that jazz… But it definitely doesn’t always have to be that way. If you’re totally ready to tie the knot with your partner and feel (at least relatively) confident they’ll say yes, why not just ask? It’ll definitely take a giant dose of courage, but hey, sometimes marriage traditions are made to be broken. In fact, on Leap Day, it’s actually tradition for women to do the proposing.

The origins of this quirky tradition have a murky history. According to Time and Date, one story claims the custom originated in 5th century Ireland with Saint Bridget asking Saint Patrick to offer women the chance to ask men to marry them. Another says it all started with Queen Margaret of Scotland, who supposedly passed a law in 1228 ordering men to accept a woman’s proposal or pay a fine to make up for his bad attitude.

In many European countries, it was common knowledge that if a man refused, he also had to buy the woman 12 pairs of gloves. Why 12 pairs? We’re not entirely sure, but we’re guessing a few budget savvy ladies probably proposed to someone they knew would turn them down just for the freebies. If you’re not getting a husband, you should at least get some fancy new accessories, right? Should your proposal be refused on Leap Day, we can’t guarantee you’ll be handed a box of gloves — but hey, just know you’ll at least walk away with our hats off to you.

Did you or someone you know propose on Leap Day? Share your story with us on Twitter @BritandCo.

Cortney Clift
Cortney is the senior writer and special projects editor at Brit + Co. She typically covers topics related to women's issues, politics, and lifestyle. When she's not buried behind her computer you'll find her exploring New York City or planning her next big adventure.
Engagement
Relationships
Engagement