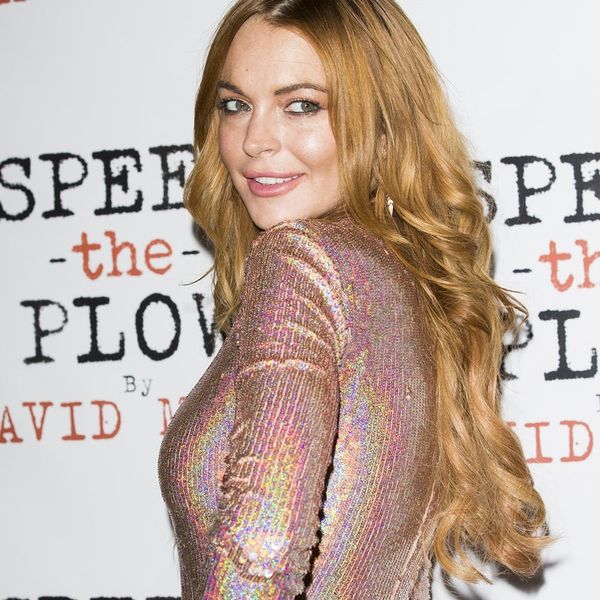 It seems as though this is the month of celebrities not only forgoing traditional wedding ceremonies (Jennifer Aniston, we’re looking at you), but also traditional wedding guest attire. Last weekend, Nicki Minaj wore a sultry red dress to her brother’s wedding and now Lindsay Lohan just shared a snap of her rocking white to a friend’s wedding.

And not just any white dress. In the photo LiLo is wearing a strapless white, embellished dress with an Angelina Jolie-inspired leg slit. Lohan even topped the look off with a bejeweled headpiece and sparkling heels. Traditionally, wearing white to a wedding has been considered a major faux pas mostly because you don’t want to outshine the bride (who, also traditionally wears white) on her special day – and to be honest, it kind of looks like Lohan is probably doing just that. We’ve yet to see what the bride’s ensemble looked like, but Lindsay’s outfit could definitely double as a slightly non-traditional bridal outfit.

Judging from the majority of the comments left on Lindsay’s Instagram it seems as though most people aren’t quite as into the idea as Lindsay was. One commenter writes, “Why are you trying to outshine the bride…?” Another says, “Outdoing the bride. Not cool.” Overall the general consensus seems to be that this particular look may have been a little too dramatic.

But wait, angry commenters! White could have been the dress code. As we have learned from recent celebrity weddings and reports from wedding experts, all-white weddings are a trend that’s catching on. If you really want to wear white to a wedding and it wasn’t part of the dress code, it doesn’t hurt to check in with the bride, brides or groom(s). If they’re cool with it, you might want to take it down a few notches from Lindsay’s look maybe by shortening the floor-length hemline and ditching the bridal inspired accessories. Or just forget about the white all together and go for a look a little more akin to what Nicki Minaj recently rocked.

Would you ever wear Lindsay’s outfit to a wedding? Share your thoughts with us in the comments below.

(Photos via @lindsaylohan and Tristan Fewings/Getty)

Cortney Clift
Cortney is the senior writer and special projects editor at Brit + Co. She typically covers topics related to women's issues, politics, and lifestyle. When she's not buried behind her computer you'll find her exploring New York City or planning her next big adventure.
Celebrity Wedding
Party
Celebrity Wedding