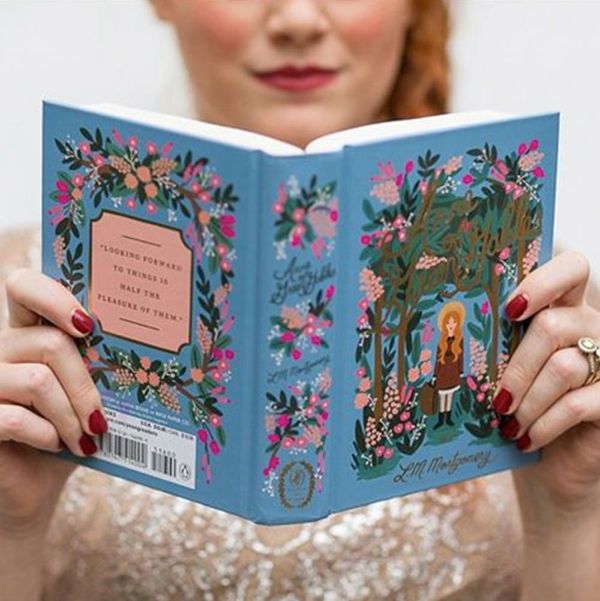 Choosing baby names can be tough. You have to decide if you want something traditional or original, family-inspired or out of the box – and then you probably have to get at least one other human on board with your decision. Yes, there are apps for this whole process (and we definitely recommend you check them out if you’re in a bind), but sometimes it’s best to start with something you know and love — like a favorite book. Here are 30 baby names inspired by our favorite fiction (and book-based movies) to help you get those baby name creative juices flowing.

1. Noah: Let’s start with a truly memorable option – because who doesn’t love the name Noah after having their young heart broken by The Notebook? (Photo via Nicholas Sparks)

2. Jo: Technically, Josephine, but we’re not sure the strong-willed Jo March would be that into us using her full name. It would be a cute and playful name for a little girl. (Photo via Rifle Paper Co.)

3. Winfield: A certifiably old-school name for a boy, this one comes straight from the heart of American lit. We’re also almost positive we’ve never met a Winfield, which means it’s likely your baby won’t have to deal with name competition or alternate spelling confusion. (Photo via The Syracuse Library)

4 + 5. Gale or Katniss: While Peeta might be pretty obviously Hunger Games inspired, Gale is actually a super sweet name for a boy. If you don’t want to hide your love for the trilogy, go ahead and opt for Katniss, which is expected to be at the top of the baby name charts this year. (Photo via Lionsgate)

6. Savannah: This wasn’t the first (and it won’t be the last) Nicholas Sparks-inspired name to make the list. What can we say? The man has great taste in names. Savannah’s an extra pretty one with a sweet, Southern heritage. (Photo via Nicholas Sparks)

7. Brett: Rather, Lady Brett Ashley. This smart, slightly hypnotizing character may be the best (and worst) part of Hemingway’s tale. And we adore her roguishly gender neutral name. (Photo via Becuo)

8. Stuart: Oh, Stuart. This little adventurer may very well have just the energy and enthusiasm you want to channel for your own little one. (via Amazon)

9. Elinor: The “sense” in Austen’s classic, Elinor has a reputation for practicality – but that makes her feelings run no less deep, and her name no less enviable. (Photo via Open Library)

10. Bella: We had to. Well, actually, you had to. The Twilight franchise catapulted Bella and Jacob to the top of the most popular baby names list back in 2011 and it’s still going strong. (Photo via Fanpop)

11. Holden: Did anyone here not read The Catcher in the Rye in high school? If you didn’t, or haven’t yet, you should add it to your list. Along with the protagonist’s name, of course. (Photo via Amazon)

12 + 13. Hester or Pearl: Here are a couple of old school name with a whole lotta power. The book’s main character, Hester, defied norms and conventions in an oppressive, conservative time, for the sake of her illegitimate daughter, Pearl. These are two great choices with an empowering backstory. (Photo via The Creative Action Network)

14 + 15. Scout or Atticus: Known for being smart, steady and an advocate of truth, kindness and justice, Atticus represents morality and reason. The book’s spunky main character Scout has a unique name that manages to be classic and modern all at once. Considering the fact that Harper Lee is now meant to be releasing a sequel to the novel, you can definitely expect these names to rise from the literary ashes in the very near future. (Photo via Story Treasury)

16. Alice: A little bit adventurous and a little bit quirky, this character is seriously endearing. Her name is pretty wonderful too (and also shares a fictional link with a certain visionary vampire). (Photo via Anthropologie)

17. Daisy: First of all, wouldn’t this be a sweet name for a little girl? And, second, Daisy Buchanan is living (fictional) proof that it ages with just as much charm. (Photo via The Daily Beast)

18. Landon: The last Sparks name in the list, Landon might actually be our favorite of the bunch. (Photo via Amazon)

19. Elizabeth: Elizabeth, or Lizzie, as her father tends to call her, is smart, determined and not afraid to speak her mind. We’ll forgive her pride (…or was it prejudice?) if we can add her name to our list. (Photo via The Guardian)

21. Anne: Simple, sweet and best spelled with an “e,” it’s hard to go wrong with a name so completely classic. (Photo via Rodeo and Co)

22 + 23. Hazel or Augustus: Take a little bit of inspiration from John Green’s best-selling novel, The Fault in Our Stars and name your little one after these two strong and inspiring characters. (Photo via FOX)

24. Charlotte: The heroine of the classic children’s book, Charlotte’s Web, this name definitely literary inspired, but not obviously so. (via Amazon)

25. Winnie: The innocent and loveable main character from Tuck Everlasting, offers up a playful yet elegant name that’s all kind of charming. (Photo via Image Kid)

26. Nelly: Even if you’re a huge Wuthering Heights fan, Heathcliff might be a little intense for 2015. However, the narrator’s name, Nelly, offers up an option that’s both meaningful and current. (Photo via Penguin Books)

27 + 28: Finn or Sawyer: So technically these are the last names of Mark Twain’s most famous characters, but they’re too darn cute to leave out. Name your babe after these rambunctious characters and hope he (or she) grows up with a similar sense of adventure. (Photos via Listal and Gutenberg)

29. Lisbeth: She’s definitely dark, but boy is she smart. If you’re a mystery -lover, put an interesting spin on the classic name “Elizabeth” by dropping a couple vowels. (Photo via Amazon)

What do you think? Are any of these classic, fiction-inspired baby names going to make your list? Let us know in the comments below!

Anne Momber
Anne is a serial optimist and hopeless romantic who lives in a big red barn with her husband and a lot of books. She loves writing essays, tackling a good DIY and is always on the lookout for a great slouchy tee.
Books
Baby Names
Books
More From Baby Names

Social media is an amazing free marketing tool that didn't exist 15 years ago. Particularly with Instagram, you can use a few images and words to tell followers who you are in an instant. While we can't share *all* the things we covered in this week's Selfmade master session on social media and brand voice, as part of our collaboration with Office Depot we're sharing a few key takeaways.