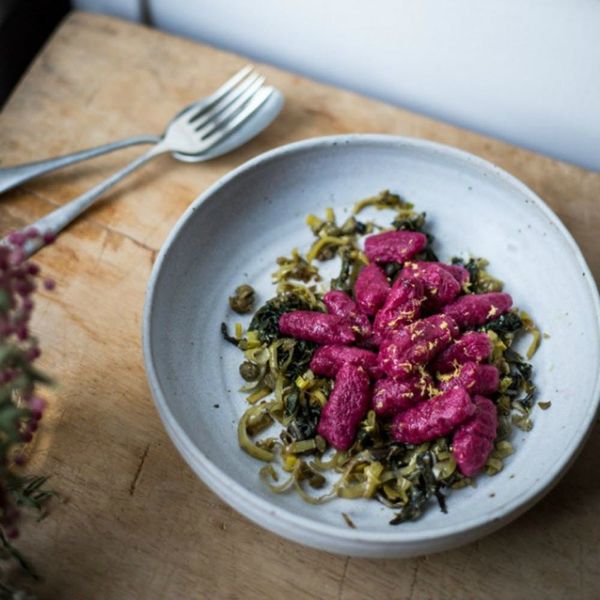 Beets are a genuine superfood, often included in juice cleanses. That’s because the dark red vegetable has two properties that help detoxify the liver: betaine, which eliminates the toxins, and pectin, which clears them from the body so they don’t recirculate. Lucky for us, beets are not only healthy but tasty too. They’re delicious in salads and as spiralized noodles, and their natural sweetness makes them a surprise ingredient in many healthy desserts. Here are 14 beetroot recipes so beautiful, you’ll *def* want to pin them ALL for upcoming dinners.

You’re looking at gnocchi that’s made with potatoes and potato flour, so it’s 100 percent gluten free. With the sweetness of beetroot offset by the saltiness of a caper gremolata, it’s so tasty you won’t be missing a thing. (via To Her Core)

With potatoes, edamame, beets, and plenty of spices, these fried beet fritters are so satisfying. Bookmark this one for Meatless Mondays, and you won’t be disappointed. (via Peace & Parsnips / Blissful Basil)

This recipe pairs golden beets with blood-red orange segments for a sweet-citrusy note that really elevates plain lentils into something extra special. (via Delicious Everyday)

When you crave the classic pairing of roasted beets, goat cheese, and walnuts, click to this recipe. (via The Cook’s Pyjamas)

Toasted buckwheat has a slightly nutty flavor that pairs well with sweet, earthy beets. Even though there’s *wheat* in the name, there’s none in buckwheat, making this buddha bowl gluten-free. (via Lazy Cat Kitchen)

This pasta is tossed with chickpeas and drizzled with a zesty lemon tahini sauce. It’s a meal that, though light, manages to feel super indulgent. (via Dishing Up the Dirt)

While beetroot is often paired with goat cheese, this one calls for salty feta that really brings out the sweetness in the veggies. It houses the ingredients in a homemade pastry shell, but you can jump-start yours with a store-bought pie crust and it will be just as delicious. (via Sugar et Al)

These bowls are a lifesaver on nights when you have to work late. Slightly sweet and packed with spices, the falafel keeps well in the freezer, so you can dole them out any time you need a quick, healthy, and satisfying dinner. (via Eat Love Eat)

Beets and goat cheese on pizza? You betcha. Something magical happens to goat cheese when it’s warmed in the oven, especially when it’s surrounded by a thick, flakey crust. (via Honest Cooking)

When you’re hungry for beets, like, right now, forego the roasting and just chop them up for a 30-minute hash. (via The Every Kitchen)

Beet and Goat Cheese Galette With Hazelnuts and Honey

Israeli Couscous With Beets and Walnuts

Large-pearl Israeli-style couscous absorbs all the lemony vinaigrette AND the pretty color of these roasted beets. (via The View from Great Island)

This combo of goat cheese, beets, and blueberries is freakin’ amazeballs. Your tastebuds will be doing the happy dance! (via Fit Mitten Kitchen)
Sally Jones
Sally Jones is a writer and editor living in New York City. She has worked at many websites including iVillage, Ladies Home Journal, More, Parenting, Cosmopolitan, The Knot and YourTango, in jobs ranging from editor to COO. Renovation and interior design are her unhealthy obsessions hobbies. She has renovated every home she's lived in, including the rentals, and like... whoa, who does that? You can catch her at her blog Renov8or.
Dinner Recipes
Healthy Eating
Dinner Recipes Healthy Recipes recipe roundup
The Conversation
Reviews:
More From Healthy Eating