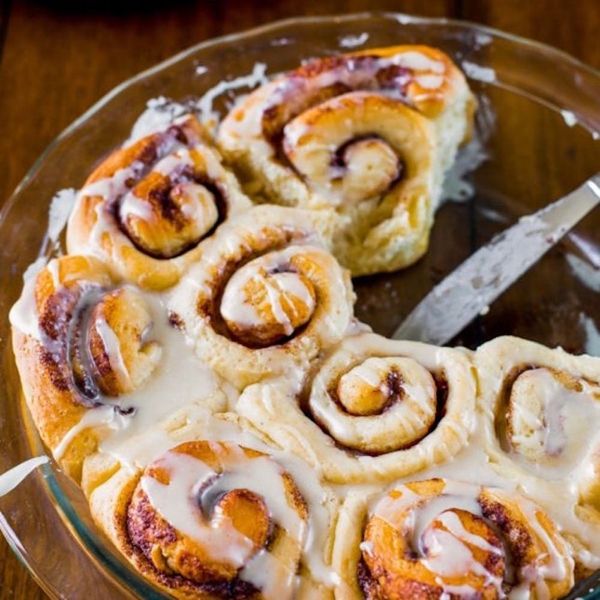 Repeat after us: Cooking AH-mazing-looking food doesn’t have to be hard. Sure, by the time you’re an expert, it can be fun to go all-out making DIY sauces and decadent olive oil cake recipes. But if you’re just getting started, you may be intimidated to attempt the awesome-looking creations you see on your Pinterest feed. Fear no more, cooking newbies… these 15 recipes look complicated AF to make, but they’re actually easy-peasy. Bonus: We’ve got you covered for everything from brunch with the ladies to dessert with your S.O.

What better way to keep weekend brunch colorful than by serving these *adorable* mini pancake bites? They’re easy to make and fun to decorate, and — bonus — they’re actually healthy and packed with protein. (via Livefit)

If you love the idea of your house smelling like cinnamon rolls in the morning, you’ve probably always wished you could whip up some like it’s NBD. This recipe avoids all the complicated steps involved in cinnamon roll prep, leaving you with delicious buns ready in about two hours time. (via Sally’s Baking Addiction)

Ditch the processed cereal and whip up this super-simple homemade breakfast bowl in the morning. Pro tip: Cook your quinoa in a meal prep sesh at the beginning of the week, and then store it in the fridge to make weekday mornings simpler. (via Two Raspberries)

Making cookies for breakfast might sound time-intensive and complicated, but all you really need are three ingredients. These babies need just rolled oats, bananas and chocolate chips — that’s literally it! (via Pint Sized Treasures)

We listed these as a breakfast recipe (because eggs), but they would also work well as a side dish or a snack. They’re packed with nutrients and healthy fats, so they’re a simple, tasty and healthy way to start your day. Oh, and they’re also Paleo- and Whole30-friendly. (via Paleo Hacks)

Speaking of Paleo-approved foods, how about this hearty and filling turkey chili? It’s easy to make (you pretty much just pop it into your slow cooker) and filled with nutritious ingredients like celery, carrots, zucchini, onion, ground turkey and tomatoes. Bonus points for serving it over sweet potato noodles. (via The Clean Eating Couple)

Light and healthy yet totally flavorful, this delicious salad is perfect for making ahead and then taking to work. You’ll just roast the veggies in your oven, throw them in your food processor, cook the quinoa, then whisk together the ingredients for the homemade honey mustard dressing. (via Fooduzzi)

This healthy-ish casserole will be a major crowd-pleaser, plus it’s packed with protein, whole grain carbs and fresh veggies. Bonus points for sprinkling it with fresh herbs (we recommend parsley or rosemary) over top. (via Half Baked Harvest)

This tasty chicken looks like it’s been steeped in a marinade for hours (and in fact, it has), but that marinade is made with just *seven* ingredients. It all comes together in your slow cooker WHILE the chicken is cooking. Couldn’t be easier, could it? (via Diethood)

If the thought of making an herbaceous orzo sounds daunting, forget what you’ve heard about the dish. This version is made in your slow cooker, and it couldn’t be simpler to prepare. The key is to add the orzo to your slow cooker near the end, giving it about 45 minutes to cook. (via Le Creme de la Crumb)

This easy taco skillet is made with tomatoes, zucchini, onion, bell peppers, baby kale and your choice of ground meat, making it super clean and easy to make. If you’re not eating Paleo, feel free to add this mixture into taco shells for a gourmet meal right at home. (via Sweet C’s Designs)

Butter chicken is one of America’s favorite Indian dishes, and making it doesn’t have to be a complicated ordeal. This crockpot recipe requires minimal effort, but if you’re feeling REALLY ambitious, you can whip up some homemade naan to accompany it. (via Half Baked Harvest)

Paleo, vegan AND completely raw, these no-bake tarts taste *exactly* like pumpkin pie. Only they’re healthier, require no baking whatsoever and basically cook themselves while you let them sit in the fridge for a few hours. (via Detoxinista)

Don’t be intimidated by the long list of ingredients in this from-scratch chocolate cake recipe. They’re all actually pretty basic (flour, sugar, etc.) and come together in minutes. (via Life Love and Sugar)

Like our other no-bake dessert recipe, this pie will need some time in the fridge to chill. But it requires significantly less time to come together — roughly an hour and a half. It also tastes like s’mores in pie form, so there’s that. (via Brown Eyed Baker)
Maggie McCracken
Maggie is a writer and editor based in Chicago (but constantly traveling). She writes primarily about wellness, mindfulness, astrology, and healthy living, and has a background in fitness and yoga instruction.
#CreateGood
Healthy Eating
#CreateGood Comfort Food Recipes Healthy Recipes recipe roundup
The Conversation