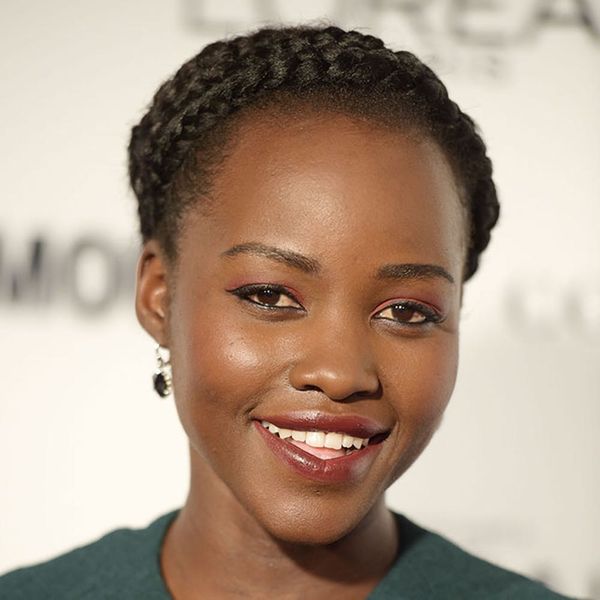 In case you’ve been living under a rock, Star Wars: The Force Awakens is about to be released, and it’s a big deal. Last night, stars (and fans) of the film stepped out on the red carpet for the world premiere, and trust us — the looks did *not* disappoint. While some stars straight up channeled the film’s characters — like Sofia Vergara and Karrueche Tran both wearing Princess Leia-inspired buns — others’ outfits simply gave off a Star Wars-y vibe, which is hard to do when you still want to look on-trend.

Lupita Nyong’o, who plays Maz Kanata in the movie, stunned last night wearing a floor-length silver sequined dress paired with a smokey silver eye that was the perfect balance of classic meets futuristic — and also gave off NYE inspo for days. Her dress really stood out on the red carpet — partly because it glistened and shone due to its sparkly factor, and partly because the pops of color throughout the silver were hard to miss. The cutouts on her side proved that showing a little skin (in the winter, no less) can be trendy and tasteful, and her mostly-bare back made her look sexy without being over the top. Perfection.

While her dress definitely stole the spotlight, Lupita’s edgy makeup was really unique and insanely glamorous in a Star Wars kind of way (yes, Star Wars makeup is a thing). Makeup artist Nick Barose painted her face for the premiere and shared some key products that made her look such a standout. At first glance, her makeup looks like classic, old Hollywood glam — that red lip (FYI, it’s Lancôme L’Absolu Rouge Lip Color  in Absolute Rouge [$31]) is perfect — but if you look closer, you can see that she’s rocking a silvery smokey eye, which really takes everything to the next level. Nick did a classic winged eyeliner style on Lupita and then topped it off with Lancôme Drama Liqui-Pencil Longwear Eye Liner in Lumiere ($23) for the silver effect. While it’s usually a no-no to have your makeup and outfit in total coordination, in this case, we’re all about breaking the rules, because Lupita looks pulled together and dressed for the occasion in a totally non-cheesy way.

Tag us on Instagram @britandco with your fave looks from the Star Wars: The Force Awakens premiere!

Beth Wischnia
You can typically find this Texan writing, trying on a new lipstick, gabbing with her identical twin sister or volunteering at the local animal shelter. She finds inspiration from rosé, beauty products, Tex-Mex and cats.
Lupita Nyong'o
Beauty News
Lupita Nyong'o