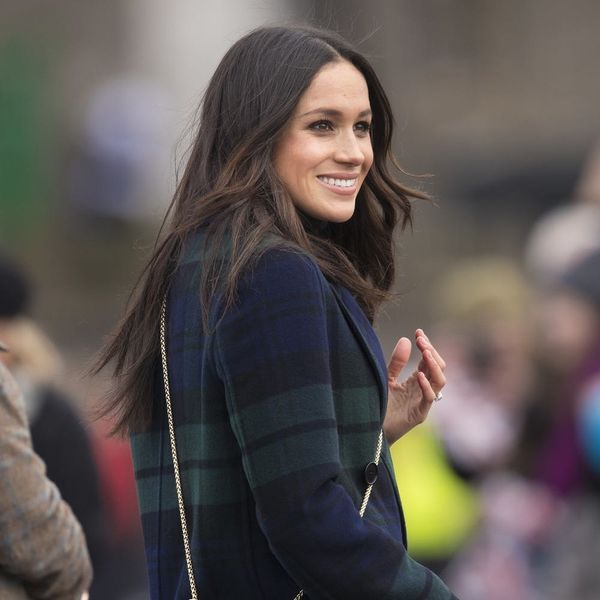 Meghan Markle and Prince Harry’s highly anticipated nuptials are just weeks away, and in the time since they announced their engagement, we’ve already seen the Suits actress’s style undergo a transformation from Hollywood to regal. While California-bred Markle is still taking in-depth etiquette training to prep for her life under the microscope, the humanitarian and one-time lifestyle blogger is definitely snubbing some of the stricter royal dress codes. Here are some of the ways she’s sticking to her personal style.

1. No Stockings: At the official photocall to announce her engagement to Prince Harry, Markle broke a major royal fashion rule by showing up without hosiery. Yep, every pic you’ve ever seen of the Queen, Kate Middleton, or any other member of the royal family, they’re usually wearing nude pantyhose. For her engagement announcement, though, Markle opted for bare legs and a pair of Aquazzura Matilde Suede Stiletto Pumps ($300). (Photo via Samir Hussein/Samir Hussein/WireImage)

2. Non-clutch Purses: While it’s not a must that members of the British Royal Family carry clutch purses, there’s a reason why they tend to opt for them. For Princess Diana, she used those handy little bags to cover up her cleavage (another fashion no-no!) when she exited cars. As for Kate Middleton and the Queen, royal protocol dictates that only a member of the royal family can initiate a handshake, and having their hands full helps circumvent awkward social moments. In her limited time making official appearances, Markle has already broken this unofficial rule numerous times — but on the plus side, she’s gotten to showcase her impressive handbag collection. (Photo via James Glossop – WPA Pool/Getty)

3. All Black Outfits: Another sartorial rule that Markle has cast aside repeatedly is the one that states royalty can’t wear all black outfits unless it’s for a somber or commemorative occasion. Indeed, it’s because of this (and the fact that the royal family can’t make political statements) that the Duchess of Cambridge faced backlash for wearing green instead of black to the BAFTA Awards this year. (Photo via Andrew Milligan – WPA Pool/Getty)

4. Messy Buns: While there’s nothing in the official rule book that is anti-messy buns, many criticized Markle for showing up to her first appearance of 2018 with a messy bun. Members of the royal family are representing the monarchy and are expected to look polished and presentable, but we love that she kept it real. After all, some days are just messy bun days. (Photo via Chris Jackson/Getty)

5. Removing Coats: If you’ve ever kept track of Kate Middleton’s public appearances, you’ll notice that Princess Charlotte and Prince George’s mother tends to wear a lot of dress coats. The reason behind that is that it’s considered unladylike for a royal to remove her coat in public, and so Middleton often keeps her coats on even indoors. Markle, however, isn’t officially royal yet, and in her many official engagements so far, has been photographed several times with her coat off. (Photo via Tim Rooke – Pool/Getty)

6. Sheer Dresses: For their official engagement photo sesh, the retired actress chose a stunning Ralph & Russo gown with a sheer illusion bodice. As far as ensemble choices go, the look was definitely very risqúe for a royal engagement shoot — not to mention all that excessive PDA (we joke). (Photo via Handout/Getty Entertainment Images/Getty)

7. Big Bags, Distressed Jeans, Crossed Legs: While this photo was taken shortly before Markle and Prince Harry officially got engaged, we’ll likely never see the 36-year-old look this casual again. At the Invictus Games in Toronto back in September, Markle wore a big tote bag (which will probably be replaced with a clutch). She also sported a pair of trendy distressed jeans. While royals are allowed to wear denim in casual circumstances (see Prince Harry), the denim is never supposed to look worn or full of holes. Lastly, while she was casually watching a sporting event, Markle sat with her legs crossed, which isn’t allowed either. Moving forward, she’ll likely be seen doing the “duchess slant” with her legs when sitting, and crossing at the ankles. (Photo via Karwai Tang/WireImage)