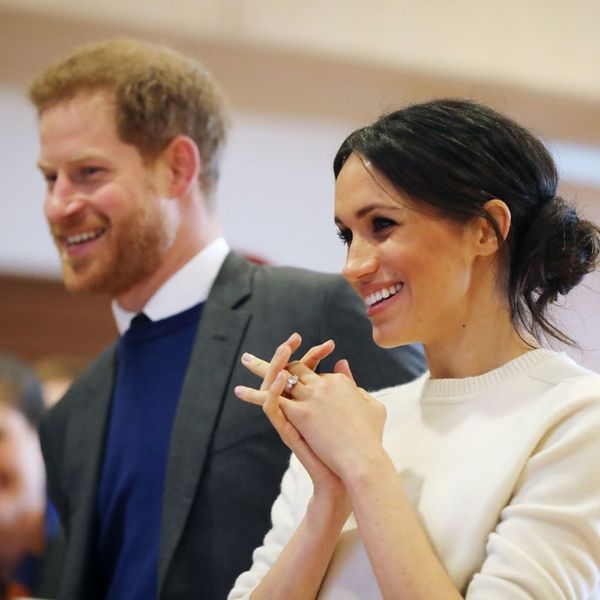 As the wedding date for Prince Harry and Meghan Markle approaches, we’re starting to catch glimpses into the particulars of their big day. From inviting thousands of members of the public to the ceremony, to Markle’s planned speech at the reception, to their own boundary-breaking union, the couple is obviously not only committed to each other, but to making their celebration a modern one, full of personal details that reflect their relationship. But that doesn’t mean they’re foregoing all tradition — there will be plenty of the pomp, circumstance, and haberdashery that fascinate us all, regardless of where we live. Read on for some of the best royal wedding traditions we can expect to see on May 19!

1. Get permission first. All royal descendants seeking to get engaged must first ask the royal sovereign’s permission first, and we find the thought of Prince Harry asking Queen Elizabeth for her blessing to marry Markle quite sweet. Obviously, she’s fully supportive of the couple’s union!

2. The bridal party could be basically babies. Traditionally, the bridal party consists of the youngest members of the royal family — usually girls between the ages of 10 and 12 accompany the bride down the aisle. Of course, Kate Middleton famously broke with this tradition when she named her 27 year-old sister Pippa Middleton as her maid of honor, and we’re excited to see who Markle will choose (other than Princess Charlotte, of course!).

3. Forget business causal. In “no duh” news, royal weddings require seriously formal dress. This means ladies should be dressed “appropriately for church” — which for the British royal family means covered shoulders, a hat, and modest, subdued colors. And absolutely, positively no cream, ivory, or white, as that range of color belongs firmly to the bride, a tradition started by Queen Victoria on her own wedding day in 1840. Men should wear formal military dress, a morning suit, or a lounge suit.

4. The queen reigns. Many of the most strident royal wedding rules regard the queen herself. There’s a strict no hugging policy, and you may only shake her hand or speak to her if she presents her hand or speaks to you first. British citizens are required to bow or curtsy to the Queen when she enters and exits the church, and while Americans are not required to, they may do so out of respect. Need a quick refresher on your form? Ladies must place their right ankle behind their left and dip at the knee, with their arms at their sides and bowing their head slightly. Men should bend their elbows and place their hands, palms in, at their waist, then bend slightly at the waist while also bowing their head.

5. Celebrate flower power. The bride always carries a sprig of myrtle in her wedding bouquet, a tradition that dates back to Queen Victoria, as the flower is known affectionately as the “hero of love.” After the ceremony, the bride places her wedding bouquet at the Tomb of the Unknown Warrior, a thoughtful gesture first started by the late Queen Mother.

6. Gifts are required. We’re pretty confident that Prince Harry and Meghan Markle do not have a Bed, Bath, and Beyond registry set up. So what’s a royal wedding guest to get the newly married pair? It’s widely accepted that a charitable donation (to the tune of $500 and up) is a perfect gift for a couple who definitely has it all.

7. Sending thank-yous is a piece of cake. Literally — royal wedding guests are mailed a slice of the cake as a thank-you for attending the event. While we think that’s definitely a sweet gesture (get it?), word is that the confections are often fruit cake flavored. It will be interesting to see if the American will go for that… unique flavor.

What are you most excited to see at Prince Harry and Meghan Markle’s wedding? Tweet us @BritandCo to share your thoughts!