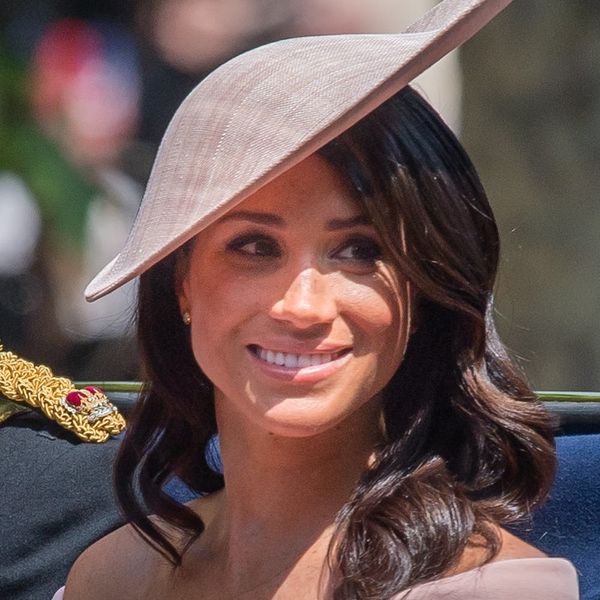 Trooping the Colour just got a little more stylish!

Each year, the royal family gathers together on the Buckingham Palace balcony to celebrate the birth of Queen Elizabeth II with a parade-like affair performed by members of the British and Commonwealth armies. While the event always makes for some serious sartorial moments (remember Middleton and Princess Charlotte’s adorable pink mommy-and-me getups from 2017?) we got an *extra* dose of fashion” this year thanks to the family’s newest addition: Meghan Markle.

The Duchess of Sussex made her event debut in a blush, off-the-shoulder custom Carolina Herrera gown with asymmetrical button-down front. She topped off the look with a matching Philip Treacy hat.

As The Sun reported, members of the royal family typically aren’t allowed to bare skin, making Markle’s choice a daring, if lovely, one.

Her dress also stood out for its light pink hue, which stood in contrast to the icy blue, square-neck Alexander McQueen design sister-in-law Kate Middleton wore with a matching Juliette Botterell fascinator.

Camilla Parker Bowles, Princess Charlotte (who stole the show alongside Prince George in a recycled blue frock), and Queen Elizabeth II also all wore matching shades of ice blue, the Queen’s by her own dressmaker, Stewart Parvin.

What do you think of Meghan’s blush ensemble? Sound off over @BritandCo.

Nicole Briese
Nicole is the weekend editor for Brit + Co who loves bringing you all the latest buzz. When she's not busy typing away into the wee hours, you can usually find her canoodling with her fur babies, rooting around in a bookstore, or rocking out at a concert of some sort (Guns N' Roses forever!). Check out all her latest musings and past work at nicolebjean.com.
Celebrity Style
Celeb Style
Celebrity Style Kate Middleton Meghan Markle Style Royal Family
More From Celeb Style