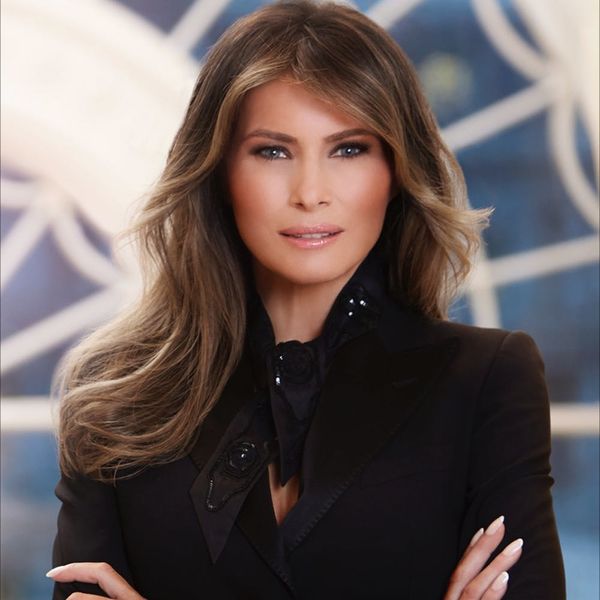 Like any first lady, Melania Trump’s outfits are often dissected and interpreted by the public. Whether it was speculation over her dress for Inauguration Day, buying off the rack as she did for the State of the Union address, or even that infamous Gucci pussy bow blouse she wore for a debate — what Trump wears makes headlines.

Her latest sartorial choice, a fire-engine-red Valentino midi dress ($5,490) worn to welcome Chinese President Xi Jiping and his wife Peng Liyuan, may have had some deeper symbolism behind it.

Melania is serving Marie Antoinette vibes in this stunning ensemble ✨👄

As People noted, it was the dress’s color that seemed to speak volumes, as red is often seen as a symbol of good luck and celebration in China — generally worn for Chinese New Year or for weddings. The former model finished her look off with a red-soled shoe, as well — Trump chose a pair of Christian Louboutin’s Pigalle Follies floral pumps ($715).

Red is also a shade that’s been traditionally worn by the first ladies and even duchesses when meeting with Chinese leaders. Michelle Obama wore a gorgeous dark red floral number by Alexander McQueen for a dinner with Chinese president Hu Jintao in 2011.

Duchess of Cambridge Kate Middleton wore a red Jenny Packham frock, along with the Lotus Flower royal tiara, during a state visit banquet with President Xi Jinping in 2015.

What do you think of the First Lady’s fashion choice? Tell us over @BritandCo.

Nicole Briese
Nicole is the weekend editor for Brit + Co who loves bringing you all the latest buzz. When she's not busy typing away into the wee hours, you can usually find her canoodling with her fur babies, rooting around in a bookstore, or rocking out at a concert of some sort (Guns N' Roses forever!). Check out all her latest musings and past work at nicolebjean.com.
Celebrity Style
Celeb Style
Celebrity Style Politics