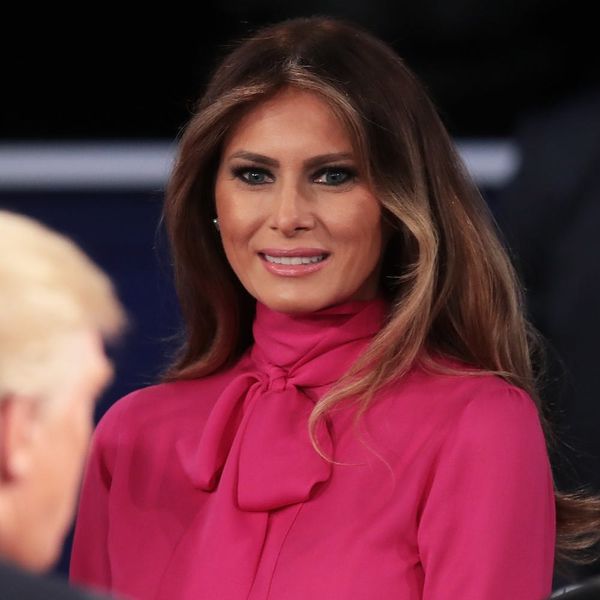 While those watching the second presidential debate surely noticed Donald Trump’s creepy behavior and were entertained by celebs’ intense reactions, others may have spotted a very subtle yet amazing detail. Melania Trump, Donald’s wife, was wearing a gorgeous Gucci blouse. The color was striking. The design was flawless. But that’s not what’s raising eyebrows. Instead, it’s the possible shade she was throwing at Donald with the type of shirt she chose to wear.

With Donald Trump doing his best to divert attention away from questions regarding the recent tape released, in which the Republican presidential candidate can be heard saying he grabs women by the “pussy,” Melania may have been making a major silent protest and throwing serious shade at her husband during the debate without him even noticing by wearing a “Pussy Bow” blouse.

Going for a cool $1,100, Gucci’s Pussy-bow silk crepe de chine shirt is certainly a stylish choice for the possible first lady who used to be a model. But it’s Melania’s familiarity with the fashion industry which makes some think that there’s no way she could have done this accidentally.

I kid you not, @m_rhodan tells me the style of Melania Trump's top is actually called a pussy bow.

Just occurred to me… the neckline on Melania Trump’s beautiful outfit – I believe – is called a “pussy bow.” Interesting sartorial choice.

Apropos of nothing: the dress Melania Trump is wearing features a giant accessory known as a "pussy bow." #debate #gucci

Some wondered if it was a coincidence or intentional…

Melania Trump is wearing a fuchsia pussy bow blouse, which is either a fashion statement or an epic subtweet of her husband

Either way, peeps LOVED it…

Do you think Melania’s choice of blouse was a coincidence or was she throwing stylishly subtle shade? Tweet us @BritandCo!