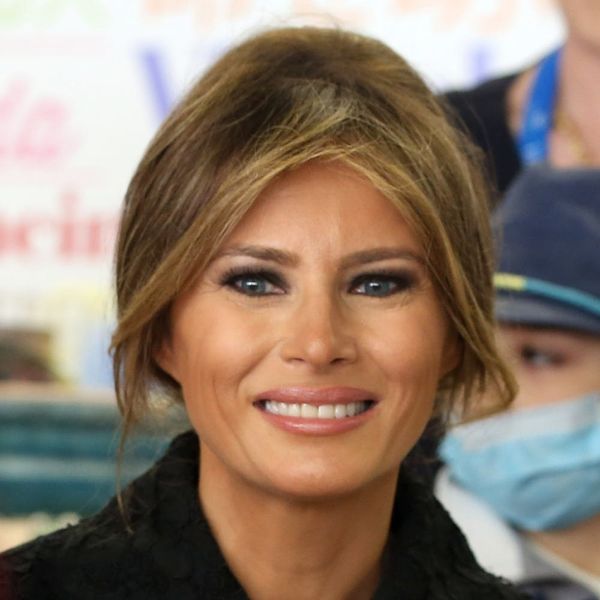 Since becoming First Lady back in January, Melania Trump has worn some pretty pricey outfits by most standards: You may recall the $10,000 Michael Kors suit she donned to President Trump’s Joint Session of Congress or the $2,400 Roland Mouret LBD she wore to a White House dinner. The floral coat she just wore in Sicily, Italy for the G7 Summit, however, may have been her priciest look yet.

Stepping out of a big black car, President Trump’s wife was seen smiling in a cream midi-length dress, oversized shades, and the Dolce & Gabbana Alta Moda coat in question, worth a whopping $51,500.

She paired the look with a matching Dolce & Gabbana Miss Dea Lace and Floral Pouchette clutch (now sold out) for a $1,630 finish.

The look is a controversial one, both because of its cost and the big name behind it, as Italian designer Stefano Gabbana (the same designer behind her White House portrait look) has very publicly supported dressing Trump whereas others have not.

While there’s no word on whether she actually paid retail for the coat or if it was gifted/on loan, its price tag also came as a shock for many due to the fact that, as Teen Vogue pointed out, it was nearly equivalent to the median American salary reported for 2016 of $56,516.

It was also well above the cost of the estimated $7,000 to $13,000 Armani jacket Hillary Clinton was criticized for wearing during her campaign and the $540 Lanvin sneakers Michelle Obama caught heat for.

Neither Trump nor Gabbana seemed to place too much emphasis on the backlash, as she sported several more of the designer’s looks during her trip, including the floor-length floral print gown she wore for an art and garden tour and a custom jeweled black sheath dress in which she addressed US military personnel and their families.

Gabbana proudly posted all three looks to his page with one unified message throughout: “THANK YOU. #madeinitaly.”

Do you have *feelings* on Melania’s coat? Tell us all about them over @BritandCo.

Nicole Briese
Nicole is the weekend editor for Brit + Co who loves bringing you all the latest buzz. When she's not busy typing away into the wee hours, you can usually find her canoodling with her fur babies, rooting around in a bookstore, or rocking out at a concert of some sort (Guns N' Roses forever!). Check out all her latest musings and past work at nicolebjean.com.
Controversy
Celeb Style
Controversy Designer
More From Celeb Style