Are Men More Obsessed With Plastic Surgery Than Women? 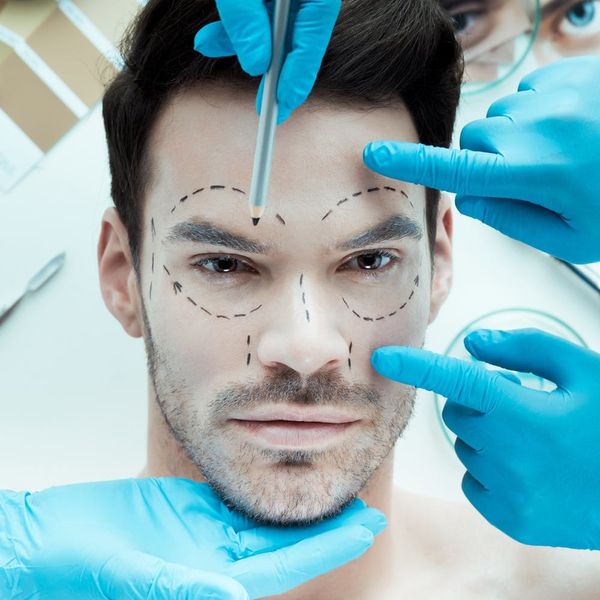 When you think of plastic surgery, you’re probably more likely to think of women than men. Sexist? Maybe. Reality? Definitely. So you’ll be surprised then to learn that men have hopped on board the vanity train, scheduling plastic surgery appointments more frequently than ever before. Yup, it turns out that Botox, Restylane, and Juvederm; nose jobs; breast reductions; and even liposuction aren’t only reserved for us gals. Board-certified plastic surgeon David Cangello of Cangello Plastic Surgery says, “I see more male patients now than ever in my decade of practice. A celebrity fitness trainer, who has me on speed dial, comes to see me before every single media appearance.” Maybe it’s the effects of social media; maybe it’s just life. All we know is, it’s official — women aren’t the only ones headed to the derm for a quick injection of confidence.

According to the American Society of Plastic Surgeons (ASPS), more than 1.3 million cosmetic procedures were performed on men alone in 2017. So which treatments are men suddenly vying for? As confirmed by the ASPS, it ranks in order from tummy tucks (up 12 percent last year), to liposuction (up 23 percent last year), to male breast reductions (up a whopping 30 percent). According to Cangello, liposuction is either geared toward shrinking the belly, love handles, and lower back or for carving out a more defined jawline through the neck and chin area. He explains that men are getting breast reductions not just to lessen the volume of their breasts but to help restore a shapely chest physique so that men will feel more confident when going shirtless. Lastly, he notes that rhinoplasty is proving to be one of the most self-esteem-enhancing procedures for men.

While not every guy is in search of a more prominent jawline, smaller waist, or new nose, many do want to look younger, stronger, and more masculine. As a result, they have finally discovered what we women have known for years — dermatologists are the fairy godmothers of youth, and, when it comes down to it, a little work isn’t as big of a deal as many make it out to be. It’s this realization that’s led many men to consider neurotoxins and fillers (like Botox), not to mention the ever-popular CoolSculpting, to help enhance their appearance for a more graceful approach to aging.

For the first time ever, so long as it won’t take forever and a day to complete, guys are proving to be more open to cosmetic enhancement, regardless of cost. “Most guys want a quick fix with little to no downtime,” says Gail Mautner, a board-certified dermatologist at Millburn Laser Center. While we all know men aren’t the most patient (kidding!), that’s not what it comes down to when talking about zero downtime. Rather, they require little to no lag because they don’t want to be found out. And, I mean, hey, same. 🤷

Know any guys who are obsessed with Botox or other treatments? Tweet us @BritandCo!

Jenny Altman
Jenny Altman is a Brooklyn born, NYC based fashion and travel expert. She loves to explore the world (favorite place New Zealand) almost as much as she loves to help women with their bras and beauty issues. Jenny is often found fitting women for bras at department stores or talking about feminine needs in the Target tampon aisle. Jenny has been a featured expert on Rachael Ray and GMA as well as in InStyle, Glamour, BusinessInsider, Marie Claire, R29, PopSugar, Bustle, HuffingtonPost and more. She loves chatting bras/undies @IAmJennyAltman.
Skincare products
Skincare
Skincare products