Here Are All the Coolest Windows Gadgets Microsoft Just Introduced 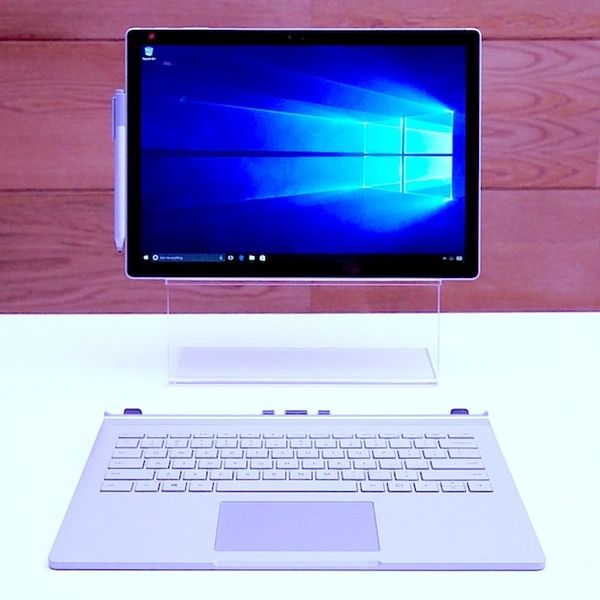 Recently, all the major tech giants (we’re talking ’bout you, Apple and Google) have been hosting media events to introduce all the major innovations they’re planning on debuting at the end of the year. Some of these projects are the culmination of years of hard work (like the Surface Book), and as a consumer, it’s super exciting to see all the incredible places technology is headed. Today was Microsoft’s turn as they hosted their event at the historical Skylight at Moynihan Station in New York City.

There are currently 110 million Windows 10 users around the world. Therefore, there are a lot of people who are about to be verrrry excited about the flock of brand new Windows 10 devices. There’s everything from smartphones to fitness wearables to the first ever laptop designed by Microsoft. Get your wish lists ready — here they are.

First off, the Microsoft Band ($250) got a facelift. The fitness wearable now has a cool curved glass display and an overall design that has no sharp angles so that it feels “seamless.” This smart band not only measures you heart rate, distance and number of steps and has a built-in GPS, but it also tracks your sleep quality, is equipped with a barometer to measure your altitude and even uses a special algorithm to calculate your max VO2, which is the rate your body circulates oxygen to working tissues. Amazing! Of course, it also keeps you connected by giving you access to your text messages and emails. So cool.

Then, they introduced the brand new Lumia 950 and 950XL phones. For the Lumia 950 ($549), aside from giving it a durable, scratch-resistant 5.2 inch Corning Gorilla Glass 3 display, they also implemented a 20-megapixel (!!) back-facing camera that does 4K video recording. They didn’t skimp on the front-facing camera either, which is 5MP wide-angle and 1080p. The 950 runs Windows 10 OS and probably the coolest thing it does is Continuum. Just plug the phone into a Microsoft’s Display Dock, a nifty gadget that comes with a HDMI + Display Port and three USB ports, and the phone translates onto a computer screen like a desktop version of Windows 10. Yes, your smartphone actually becomes a computer.

The Lumia 950XL ($649) came with a 5.7 inch Gorilla Glass 4 display and also the USB-C Fast Charge port, which will give you a 50 percent charge on your phone after just 30 minutes. The camera specs are the same as the 950. What’s also cool about the Lumia phones is that Microsoft gives you the option to up the storage in case the 32 GB it comes with is not enough. In fact, you can add up to TWO TERABYTES of additional storage. That a looooooooooooot of photos.

Next, they showcased the brand new Surface Pro 4 (starting $899), Microsoft’s now iconic tablet computer that bridges the gap between tablets and laptops. The new Surface Pro 4 comes with a 12.3-inch PixelSense Display and the Surface Pen, which has 1024 levels of pressure sensitivity. Plus, the stylus attaches magnetically to the top of the tablet for easy stowing, which is a pretty nifty trick. Of course, the tablet also comes with a detachable keyboard fold that acts as a cover as well. All in all, an amazing tablet computer.

Then came the big one. When VP of Surface Products Panos Panay first introduced the Surface Book ($1499), he passed it off as a still-very-revolutionary device, as it is the first laptop that Microsoft has ever engineered themselves. The computer comes with one terabyte of storage, a 13.5-inch PixelSense Display, a glass trackpad with fingerprint identification, up to 12 hours of battery life for video playback (that’s a lotta battery) and is twice as fast, Microsoft claims, as the MacBook Pro. BUT THEN CAME THE SURPRISE. The laptop computer we all thought was the Surface Book was in fact a tablet computer as well. Using a Microsoft trademark called muscle wire technology, the screen actually locks securely onto the keyboard via the fulcrum hinge and detaches easily with a simple tug. The Surface Book also comes with a Surface Pen stylus and acts like a Clipboard. According to Panos Panay, “It has touch. It has a pen and more pixels than any screen in its class.” Perfect for creatives on the go.

Will you be trying out any of these new gadgets? Tell us in the comments below!