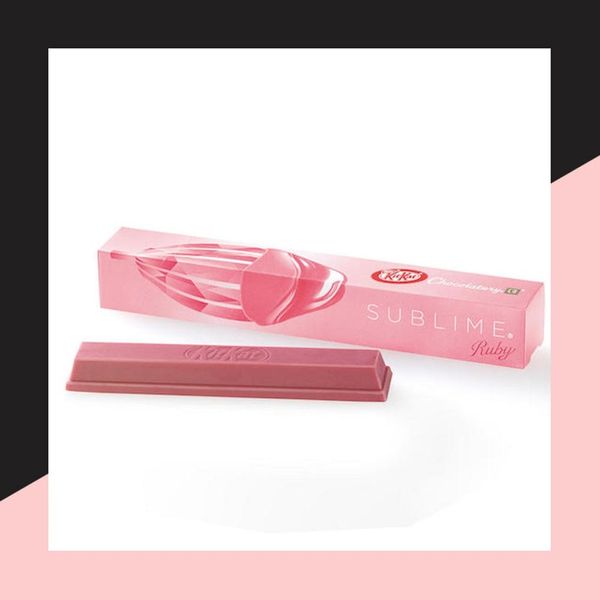 While there’s no shortage of sweet treats we can’t wait to get our hands on this Valentine’s Day, including Target’s new Dylan’s Candy Bar collaboration, there’s one treat in particular that has us practically salivating, if only for its magical hue: *PINK* Sublime Kit Kats now exist!

Not only do these millennial pink bars look different from the OG version, but they actually taste a wee bit different too. That’s because the rosy hue is natural, thanks to a newly discovered fourth type of chocolate that’s been aptly dubbed “Ruby chocolate.”

The pale pink treat was unveiled last September by Swiss chocolatier Barry Callebaut, who has been working with the Ruby cocoa bean for the past 10 years in a unique way to harness its natural color and flavor.

As far as its taste goes, according to a press release on Callebaut’s website, “Ruby chocolate is an intense sensorial delight,” and elicits “a tension between berry-fruitiness and luscious smoothness.” Sounds *perfect* for pairing with that flaky, crispy Kit Kat center, if you ask us!

Pink chocolate? #KitKat has launched a new product in #Japan and #Korea made from the all-natural Ruby cocoa bean with a berry flavor. Register to find out about international delivery in select countries: https://t.co/HmcqF6TiMq pic.twitter.com/i35y4OHqwP

As Callebaut said in a press release, “Nestle was very quick in spotting the trend and in introducing a Ruby chocolate version of KITKAT, which will entice consumers across Asia and beyond.”

There *is* some not so sweet news, as well: Unfortunately Ruby Kit Kats are only readily available in Kit Kat Chocolatory stores in Japan and South Korea, with no plans to launch in the US at this time, according to a statement from Kit Kat’s parent company, Nestlé Global.

Still, there is a light at the end of the tunnel, with Nestlé noting that it continues to “explore bringing new items, like Ruby, and special flavors into our iconic brand lineup based on what our fans are telling us they want.”

You heard ’em, folks: Better hit up those social media accounts, and quick! Or, if that doesn’t work, you can also snag them online come February for roughly $3.60 USD when you register your email address.

Will you order the new Ruby Kit Kat? Let us know @BritandCo!