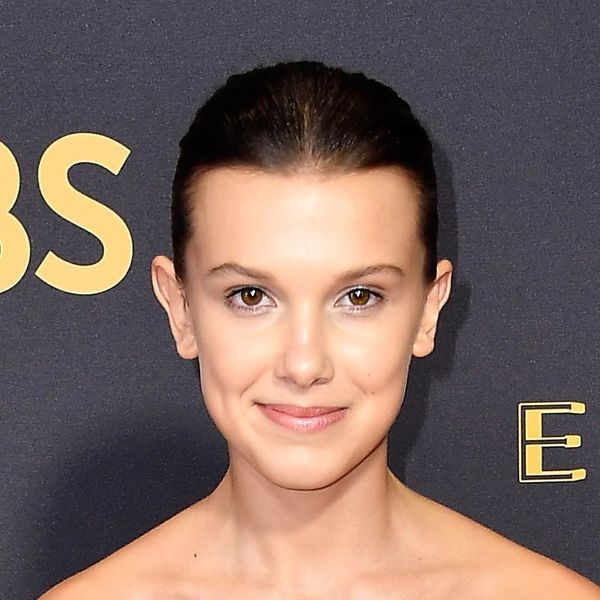 Season two of Stranger Things wasn’t the only thing that premiered last night! The series’ breakout star, Millie Bobby Brown, also hit the red carpet with a brand new look that totally had us feeling like we’d been transported to the upside down.

From the moment we first laid eyes on her character, Eleven, on the lam in her dirty hospital gown, she had a fully shaved head. It was a style which Brown, 13, committed to off-screen as well.

As we’ve seen from the star’s Instagram page, there’s been some growth since then, with a wavy coif that most recently appeared to hit just below her chin.

You guys! My @lofficielparis cover story is coming out tomorrow! 👁

But at the show’s LA premiere last night at the Regency Bruin Theater, the leading lady walked the carpet looking like a whole new teen, with sleek, long locks that just grazed her shoulder.

While it was unclear if she was wearing extensions or simply utilizing her straightening iron to the fullest capacity, the longer look was a fitting one, particularly since Eleven’s own hair has also evolved into a longer, curly style onscreen, no blonde wigs necessary. “It was my real hair,” the actress told E!.

Still, you might be surprised to know that if the young star had her way, she’d actually shave it off again. “Shaved, for sure,” she told the outlet. “Shaved will always be my favorite hairstyle.”

We, for one, think she looks like a total goddess either way!

Do you like Eleven er, Millie Bobby Brown’s hair better long or short? Sound off over @BritandCo.

Nicole Briese
Nicole is the weekend editor for Brit + Co who loves bringing you all the latest buzz. When she's not busy typing away into the wee hours, you can usually find her canoodling with her fur babies, rooting around in a bookstore, or rocking out at a concert of some sort (Guns N' Roses forever!). Check out all her latest musings and past work at nicolebjean.com.
Celebrity Hair
Hair
Celebrity Hair Hair