Evan Spiegel and Miranda Kerr Are Officially Husband and Wife! 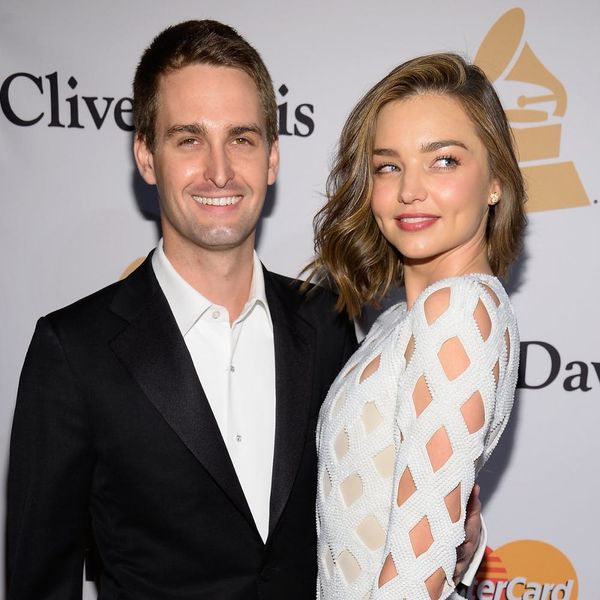 Miranda Kerr is a married woman! The supermodel and her fiancé, Snapchat founder Evan Spiegel, have tied the knot in an intimate ceremony following a 10-month engagement.

The 34-year-old Kerr, who admittedly had a rough go of it following her split from her first husband, Orlando Bloom (she reportedly used aromatherapy to fight off depression), and her 26-year-old beau first met at a Louis Vuitton dinner back in 2014. A whirlwind romance followed, followed by a 2016 engagement, with the mommy of one describing her fiancé as being a “really kind person and very genuine.”

The couple finally said “I do” yesterday at their $12 million Brentwood, California home in front of a small group of less than 50 family and friends, and while we’ve yet to see pics of their trek down the aisle, we’ve got the swoonworthy deets on their ceremony.

Guests reportedly began arriving at around 4pm and were greeted with cocktails served in an open air tent that was set up right in the backyard. A pianist (who was eventually joined by a string quartet) played “When You Wish Upon a Star,” as folks mingled and got settled in.

The nuptials began shortly afterwards at 4:40pm and lasted just 20 minutes. “The vows were beautiful,” one attendee told E!, adding that both the bride and groom got misty-eyed themselves. As for Kerr, she reportedly looked like a “natural princess.”

Once the Australian beauty had officially become Mrs. Spiegel, she made sure to get a quick touchup from famed makeup artist Lisa Storey before making her debut at the reception, which was hosted right in the home’s backyard as well.

The decor was said to be “rustic chic with farmhouse tables, white benches and chairs and light pink garden roses,” according to one wedding-goer, and, as we’ve grown to expect from Kerr, “everything was done elegantly.” We wonder if guests dined on her chic Royal Albert tableware collection?

Would you rather go for a more intimate backyard wedding? Let us know @BritandCo.